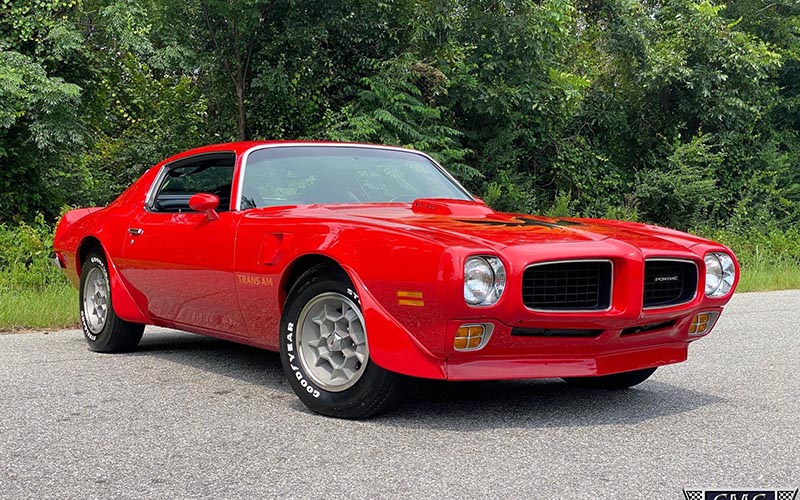 In an era when Plymouth Cudas, Corvettes and Chevelles were being de-tuned because of insurance costs and emissions controls, there was only one muscle car to left in America to carry on. That was the Pontiac Super Duty Trans Am. Although rated from the factory at only 290 horsepower, the Trans Am Super Duty could outperform any of its earlier muscle car era predecessors. It was the last of the great muscle cars in America.

This week, Carolina Muscle Cars out of Benson, North Carolina posted a 1973 Pontiac Super Duty Trans Am with the legendary SD-455 high performance motor. This one has it all. The pedigree, the provenance and the original condition are extraordinary. Follow this link to the ad to see dozens of high resolution photos of this high quality restored car. In the photos are close up shots of the numbers and tags which an appraiser used to prove his determination that all the numbers are correct. John Hansen of Michigan Automotive Inspection Services confirmed that the engine, transmission, and differential casting numbers are all correct for this car. Carolina Muscle Cars tells us that Hansen even used a borescope camera to verify a hidden VIN stamping behind the firewall. They say this car is as correct as you would expect from a 1-owner collector car.

Carolina Muscle Cars says this Pontiac Trans Am Super Duty runs and drives incredibly well and has a ton of power. The original XD engine was rebuilt in 2000 to original specs. Serviced and maintained, they say the car is very tight and has no rattles. They tell us that the original “PQ” code Hydramatic transmission shifts well, and  the car sounds amazing and is an absolute blast to drive.

According to the ad copy, a restoration was performed approximately 10 years ago. The excellent original body was stripped to bare metal and a show quality paint job was applied in the original Buccaneer Red color. All decals were applied as new. The interior has had new seat covers and carpets installed along with a new rear package tray. The rest of the interior is original and in outstanding condition. The original radio is still installed and the all the gauges are clean and crisp. Just look at the photos of the machine turned dash in the ad.

The original owner ordered his Trans Am Super Duty with so many options, the base price of $4,203 escalated to $5,027. The cost of the X code SD-455 option at the time was $521 extra. It was purchased brand new at VanderZee Buick-Pontiac, Inc. in South Haven, Michigan on March 27, 1973.  Five months later, he took delivery of his brand new Trans Am the first week of August, 1973.

The amazing SD-455 big block engine that roars under the hood of the Super Duty Trans Am was a modern era high performance gem the likes of which Detroit had not seen before. Even though it had restricted horsepower and a mild cam, the single Quadrajet Rochester carburetor provided enough power to blow away most of the earlier cars in the muscle car era.

Today these incredible muscle cars are rare to find. After all, they only built 252 SD-455 Trans Ams in 1973. (There were also 43 factory SD-455 Pontiac Firebird Formulas built by Pontiac in ’73.) They produced the SD-455 again in 1974 but even fewer were built that year. They figure only about 731 were produced for both years.

In the post muscle car era, the Pontiac Super Duty Trans Am with its legendary SD-455 was the only high performance car that kept the American dream alive.

(Find more stories on Pontiac Super Duty Trans Am muscle cars from our archives when you visit this link.)

One Response to Pontiac Super Duty Trans Am Still Stands