The rare 1969 Pontiac Trans Am may have been the best kept secret in automotive history. There were only two ads ever run in major magazines before it premiered in March of 1969. Most new car buyers never knew the Trans Am existed since it only came out as a mid-year offering that first year. Adding to the marketing failures, production was limited by a plant strike. Its mid-year introduction and a strike at one of its assembly facilities limited Pontiac’s Trans Am production to just 697 units altogether that first year. That set the scene for the first-year Trans Am to be a very rare muscle car today. Hence the six figure prices in the collector car market.

Legendary Motorcar Company is offering this Cameo White 1969 Pontiac Trans Am with blue racing stripes and a blue interior. (Follow this link to review the photos and read their ad copy.)  Cameo white with blue stripes was the only way you could by the Trans Am that first year. It was a tribute to America’s racing history. In fact, you might say the Trans Am was born in a racing tradition, named after the SCCA Trans Am racing series (even though Pontiac never entered it in SCCA racing.)

Originally sold at Kohler Pontiac Oldsmobile in Sayre, Pennsylvania, this exceptionally rare 1969 Pontiac Trans Am is one of only 520 built with a 4-speed manual transmission. They say it has benefited from a complete rotisserie restoration, “likely better than it would have left the factory.” As it stands in the photos you see here, it is complete with the original steel Trans Am hood and original Trans Am rear spoiler. These parts would be hard to come by today. Legendary Motorcar Company tells us that the undercarriage was refinished and repainted in the correct satin black paint, with the components either restored or replaced.

Under the steel hood, is a numbers matching Ram Air III 400 ci engine that has been detailed with the correct paint finishes and inspection marking. The Ram Air III 400 was rated at 335 horsepower from the factory. The 4-speed manual transmission was an option on this car when it was ordered. The base Trans-Am package also included dual exhaust, power front disc brakes, variable ratio power steering and “Saf-T-Track” 3.55 differential.

They say it comes fully documented with Pontiac Historical Services paperwork proving how the car was built and left the factory.

Just as the Chevrolet Camaro and the Pontiac Firebird were cousins, so the 1969 Camaro Z/28 and the 1969 Pontiac Trans Am were the performance versions on the family tree. There were far more 1969 Camaro Z/28s produced however. Only 689 Trans Am hardtops and 8 convertibles were produced at Pontiac that first year. Very few of them have survived for collectors to restore, so they are very valuable now in the collector car market. Pontiac marketing positioned it as a Camaro Z/28 with bigger performance engines. Where Z/28s have actually been going down in value the past four years, Trans Ams are definitely increasing in value. These are great investments for collectors. One sign of collector value is this. You will see far more ’69 Trans Am clones on the market than Camaro Z/28 clones. And the collector value of a ’69 Trans Am clone is measurably higher.

Pontiac’s Herb Adams came up with a 1-inch front stabilizer bar and improved steering that was on the virge of genius. If the Z/28 was quicker, the Trans Am handled better, and with more power. 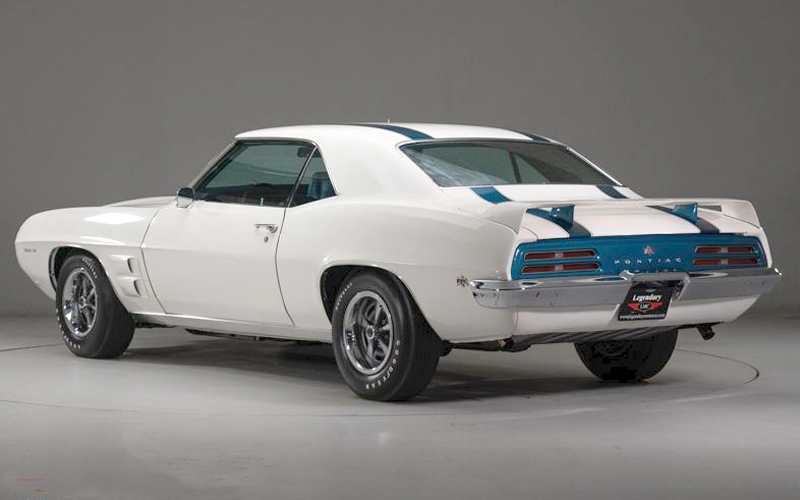