Although any first year Shelby would be a six figure car in the collector car market, the connoisseur of fine Shelby cars would prefer one of the “double digit” Shelby GT350 early production models. You have to be a real Shelby “nerd” to know what that is.

The Ford Mustang for 1965 was a game changer for the American sports car. It established a new word in the automobile culture’s lexicon, as it became known as a Pony car. To avoid the Mustang from becoming stereotyped as a “secretary’s car”, Ford approached Carroll Shelby to give it a race presence. So the Shelby Mustang GT350 was born.

For that first year, Shelby had to produce 100 Shelby Mustang GT350 sports cars for homologation for Sports Car Club of America (SCCA) sanctioned competition. These are what is known as the “Double Digit” Shelby GT350 early editions. Those first 100 cars all had just two digits at the end of their serial numbers. First produced at the San Jose, California Ford factory as K Code Mustangs, they were sent to Shelby American for the special GT350 upgrades. Shelby made numerous suspension upgrades,  added racing safety equipment, and beefed up the K Code motor by 35 horsepower.

For the discerning collector, Legendary Motorcar Company has just listed a rare 1965 “double digit” Shelby GT350 for sale out of their famous sales facility and restoration shop. (Tap this link to find dozens of detailed photos and a full history on this car.) This early example was delivered to Shelby’s Venice, California, facility (near Los Angeles) in December of 1964. According to the Shelby American factory records, it was shipped new to Harr Motor Company Inc. and was manufactured with the early production fiberglass plenum porthole hood, trunk mounted battery, 16-inch wood-rimmed steering wheel, Cragar Shelby wheels and Le Mans stripes. Unlike so many others, it still retains its numbers matching Hi-Po 289/306 hp engine backed by the aluminum case T-10 4-speed transmission and 9” Detroit Locker rear end. You will note the correct Goodyear Blue Dot tires.

This example underwent a rotisserie restoration completed by a Shelby expert using many original parts. Finished in the prerequisite Wimbledon White exterior, the inside was done with correct dash mounted 8,000 rpm tach and oil pressure gauge, factory racing lap belts, 16″ wood rimmed steering wheel and factory radio delete plate. On a hoist you will discover the undercarriage to be properly restored with floors finished in the correct factory style red oxide primer with body color overspray and blacked out pinch welds. Yes, the unmistakable sound of the factory side exiting exhaust will thrill a true Shelby enthusiast.

All 1965 GT350s were painted Wimbledon White with Guardsman Blue rocker stripes. The Lemans type stripes over the middle of the car were optional.

That first year, the Shelby GT350 Mustang won the SCCA B/Production Class championship, and the legend was born.

The allure of the “double digit” or “two digit” early production cars was that they are much more raw. The Shelby’s became more refined over the years, but those first cars were raw factory race cars. The ’65 has no power steering or brakes. The exhaust sound is unmistakable since they just had straight pipes from the headers to the exits in front of the rear wheel. The Koni shocks provide a stiff ride that remind you of being on a road racing track with your teeth chattering.

For 1965, Shelby produced 562  GT350s. Only 34 were built strictly for road racing, 9 were drag racing models, one street prototype was built, two were racing prototypes and 516 were built for street use.

For the serious collector, here is a chance to obtain an early edition “double digit” Shelby GT350 Mustang which will enhance any substantive collection. 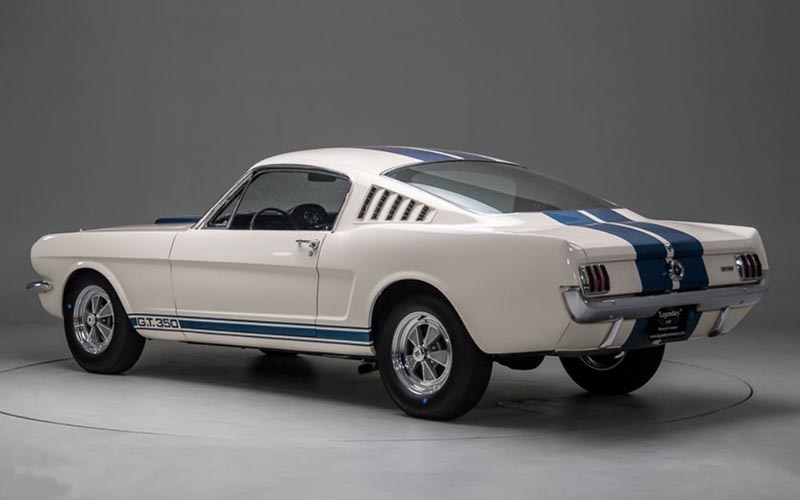 You will find more articles on early Shelby Mustangs by following this link to our directory of MyDreamCar.online stories.