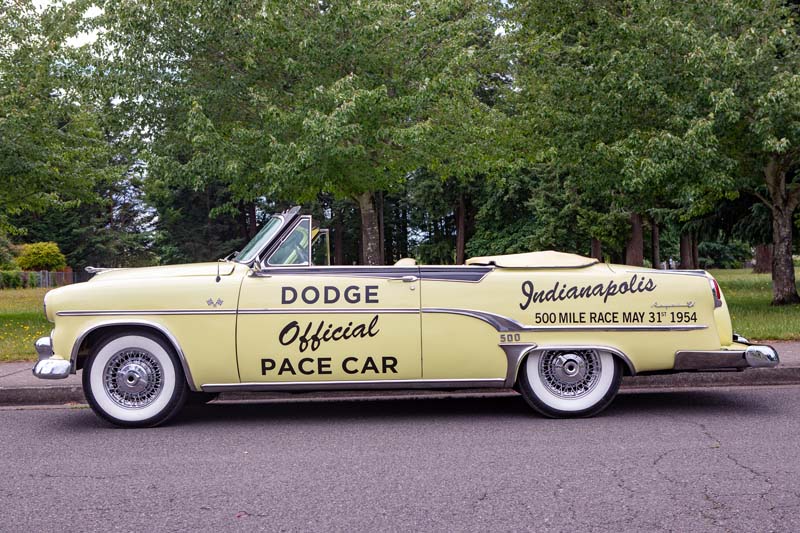 The 1954 Dodge Royal 500 Pace Car Convertible symbolized a real change in Dodge’s marketing. Leading the Dodge product lines for 1954 was the new Dodge Royal, a car that was so performance oriented that it drew a younger type of American buyer. The fact that a Dodge was picked to pace the Indianapolis 500 race for the first time that year was no chance happening. With Virgil Exner now designing for Dodge, the beginning of the Mopar performance era was not far off.

Why was the new Dodge Royal chosen to pace the Indy 500? It had the first Dodge Red Ram Hemi engine which was a 241 ci V8, and numerous unique features not found on any other Dodge that year. It had a hot rod Offenhauser 4-barrel intake manifold, and (another first) a 450 cfm Carter WCFB 4-barrel carburetor. So it was the first 4-barrel Hemi car. That alone increased performance by 20 horsepower. It was the first year Dodge offered power steering coupled with power brakes. And it was the first year for the 2-speed Power Flite transmission (Chrysler never had a fully automatic transmission prior to 1954.)

As the Dodge Royal was chosen to pace the Indianapolis 500 that year, the pace car edition became known as the 1954 Dodge Royal 500. Only 701 were built by Dodge. The 1954 Pace Car edition was finished in a special color, Pace Car yellow with Jewell black trim and a black convertible top.

This week a collector from Keiser, Oregon listed his original 1954 Dodge Royal 500 Pace Car Convertible for sale. He says it is “the finest unrestored original in the country.” And it comes with the Continental kit which was standard on all Dodge 500’s. He says it has 65,000 original miles. You can see dozens of detailed photos in the Slide Show ad on Cars-On-Line.com. Notice the Kelsey-Hayes wire wheels, also standard for the Royal 500.

The owner says there have been some authentic mechanical updates including a rebuilt carburetor, new battery and radiator flush, rebuilt starter, rebuilt transmission and rear end. The exhaust system is new, and the brakes have been serviced. It has a new top, and even the clock has been refurbished.

You can see in the photos that the yellow and black interior still looks great. What a stunning combination. The gold V in the steering wheel center celebrates Dodge’s 50th Anniversary.

Dodge pulled out all the stops to promote the Pace Car that year. First, In September of 1953, Dodge took four 1954 Hemi cars to the Bonneville Salt Flats to break 196 land speed records there. Then Dodge brought home a perfect score in the Mobilgas Economy Run. They billed it as the “Greatest Dodge in 40 Years.” Dodge was even the sponsor for the memorable Danny Thomas TV show “Make Room For Daddy.” But they topped it off by pacing the 38th Annual Indianapolis 500. With all the major radio networks carrying the race, the notoriety of having a Dodge pacing the Indy 500 race was a marketing coup for the brand. They sure were changing Dodge’s image.

To commemorate Dodge’s first time pacing the Indy 500, the factory built 701 dealer replicas all with the same eye-catching yellow and black pace car design to be purchased by the general public through Dodge dealers nationwide. All of the Pace Car editions sold by Dodge dealers had the exact same appearance as the actual pace car. The high performance 4-barrel intake was included. You would only gat a single two-barrel carb on the base edition Dodge Royal.

SignificantCars.com tells us the 1954 Dodge Royal 500 Pace Car Convertible cost about $2,800, roughly $200 more than a base Dodge Royal. It was the fastest car in its price range. According to the Automobile Catalog, the Royal 500 Convertible Pace Car could go 0 to 60 in 13.4 seconds.