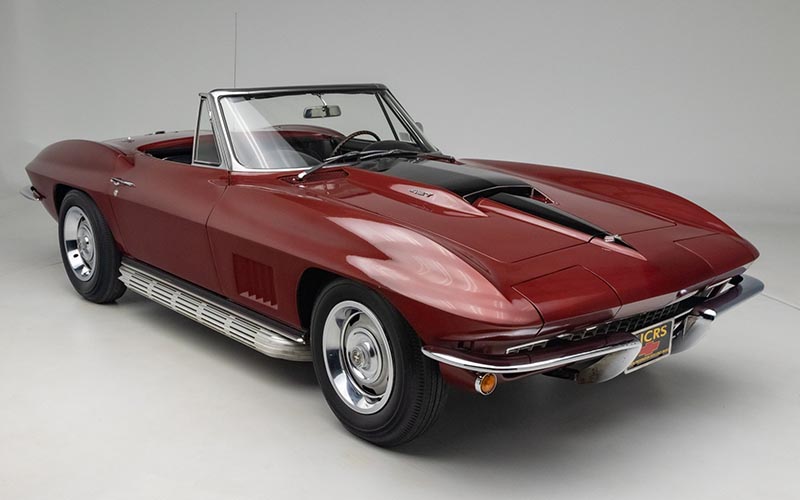 For the well-lived and the wise, something special is the prize. For many classic Corvette afficianadoes, the most highly regarded object of their affection is the 1967 Corvette L71 427/435 Convertible. With the stinger hood (only in ’67) and tripower carbs, this ultimate performance Corvette is the one every collector wants to own.

Today in the Cars-On-Line.com Corvette Section online, you’ll find one of the finest examples of a 1967 Corvette L71 427/435 Convertible left in existence. It is the most highly awarded unrestored and original L71 convertible ever to come from the factory with sidepipes. And it comes so well documented they should write a book about it. In Marlboro Maroon finish with a black stinger and black soft top, this beautiful mid-year wonder is captured in dozens of detailed photos in the ad. (Click here to view photos and documentation.) Just this week it was posted for sale. It is proudly owned by Joseph and Sunday Verrillo of Verrillo Motor Car Company in New York state.

Completely original and unrestored, this 1967 Corvette L71 427/435 Convertible won the 5 Star Bowtie award at the 2021 NCRS National Convention in Palm Springs, California; the coveted Duntov Mark of Excellence Award in 2019 at the NCRS  National Convention in Greenville, South Carolina; a Concourse Gold Certificate at the Muscle Car & Corvette Nationals in 2018; Bloomington Gold OEM as well as the Bloomington Gold Survivor award in 2018 and two NCRS Top Flight awards, also in 2018. The NCRS has validated the original tank sticker. And the 4-speed Corvette is said to have only 33k miles.

While all classic Corvettes are highly desirable, for some reason the 1967 L71 Sting Ray convertible is the one most Corvette collectors salivate for. Only a 430 hp L88 Corvette gets more attention. The average price on a ’67 L71 convertible is pretty heady.  And this car is way above the average valuation. With this kind of documentation and provenance, this car could be a record setting sale. This is one of those cars that has been trending up in value this year. So it remains a top line investment type collector car.

The 1967 L71 Sting Ray introduced the tripower, or three Holley two-barrel carburetors feeding the big block 427 engine. That performance tweak had worked for Pontiac in the GTO, but only in 1967 did the Corvette benefit from this old hot rodders performance trick. The L71 427/435 was only available with a Muncie M-21 4-speed, and air conditioning was not an option.

The back story on the 1967 Corvette is that Chevrolet wanted to come out with the C3, next generation Corvette, in ’67. But the C3 was delayed until 1968. That means the 1967 came out with a power bulge hood that was being designed for the 1968 C3’s, and a new side vent design. But few other changes were made. Yet the overall look of the ’67 C2 is considered the peak of C2 styling. Ironically, even though it may have been produced as an afterthought, it is considered one of the best looking C2 Corvettes.

In that final year of the C2 generation Corvette, fewer Corvettes were sold overall. That may have happened because Corvette buyers were aware of the new “Mako Shark” style design that was to come out in 1968. All of this makes the ’67 a coveted piece of Corvette history. And collectors can’t get enough of them.

The 1967 L71 Corvette was reported to do 0 to 60 miles per hour in 4.9 seconds. The quarter-mile times were around 13.38 at 107 mph in factory trim. That was incredible performance for a factory sports car of that era. No doubt, it benefitted from the tripower carbs setup. The center Holley two-barrel fed the monster 427 under normal driving conditions. But when you floored the accelerator the two outside carbs kicked in and fed the monster. When all three carbs were feeding the 427 it was a beast. 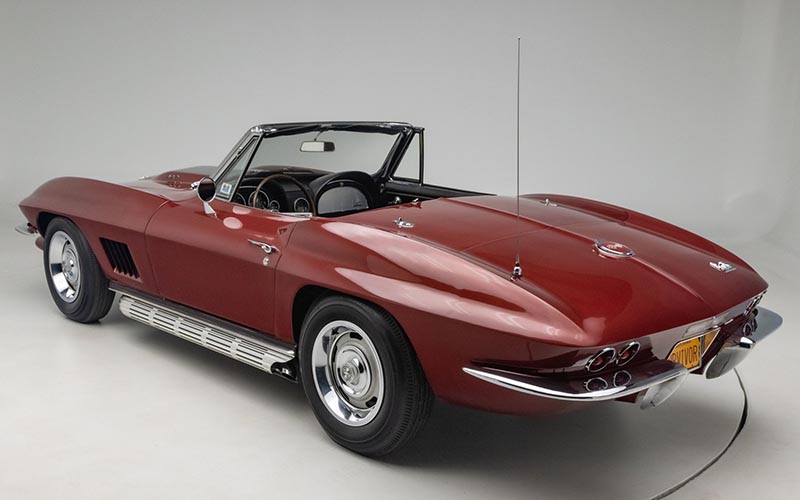