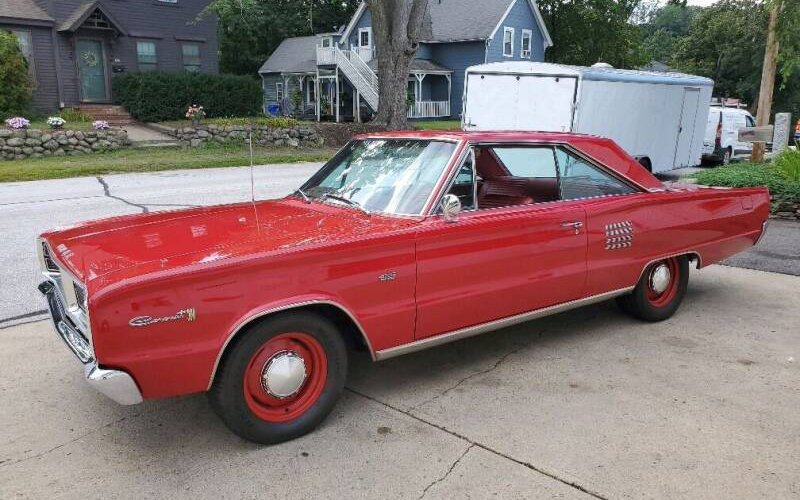 There are lots of interesting stories in the Mopar culture about 426 Hemi cars. But in 1966, when the 426 Street Hemi first came out, you had to buy a Dodge Coronet or the new Dodge Charger to get the now famous fat headed Hemi engine. With massive valve covers and potent performance, the 1966 Dodge Hemi Coronet 500 was the Elephant in the room among racing legends back in the day. It is still a thrill to see it and hear it today.

When Carroll Street Auto in Manchester, New Hampshire listed a 1966 Dodge Hemi Coronet 500 this week we knew we had to do some homework on it. These rare first-year Hemi cars don’t come along that often, and this one is said to be very original. (Follow this link for more info and photos.)  It was ordered with the 426 Hemi engine and a 727 Torqueflite automatic transmission with the console shift. The good people at Carroll Street Auto tells us it has original power steering, 3.23 Sure Grip differential, remote left sideview mirror, undercoating, tinted glass, AM radio with rear speaker and a 3-spoke “Sport” steering wheel.

The 1966 Dodge Hemi Coronet 500 was decoded by Mopar historian Galen Govier. Other documentation includes broadcast sheets (see the photos on the ad page) which further authenticate this as a real Hemi car.

Carrol Street Auto notes the “arrow straight and original” body panels. The factory Bright Red paint is said to still provide a shine, as does the various chrome and stainless-steel trim. Dog Dish hubcaps ride on color matched steelies. They say the original wheels add to the “street brawler vibe.” Underneath you will find the original floors and trunk pan. A set of factory gauges keep tabs on that monster Hemi engine.

They tell us the big 426 Hemi engine idles and moves smoothly in street traffic. But step into it and it bellows and snorts its approval, pinning you back into the seat. They say it handles and brakes well. You can tell it is a well cared-for classic muscle car.

In 1966, they reported 2,729 Street Hemi passenger cars were built and sold. That was the most Hemi cars ever sold in a single year from 1966 to 1971. The ad campaign for Dodge that year used the theme “Join the Dodge Rebellion.” The first-year 1966 426 Street Hemi engine had to be available in a large number of mass produced Coronets and Chargers to be allowed to run in NASCAR. Chrysler only allowed them in the B-body cars. They did not want to sell that many Hemi cars, because the 426 Hemi engine was so expensive to produce. But NASCAR would not allow them to use Hemi engines if they did not mass produce 426 Hemi passenger cars. In fact, after the 426 Cross Ram Hemi cars appeared in NASCAR in 1964, the 426 Hemi was banned until Chrysler would produce them for street use in large numbers in 1966.

There are some interesting statistics to consider when researching Hemi cars for 1966. For instance, of the 2,729 Street Hemi cars produced, you could get it in any of the Coronet body styles, i.e.  2-door business sedan, the 2-door hardtop, 4-door sedan and the slick 2-door convertible. Just 27 Hemi ragtops were produced; six were Coronet 440 models and 21 were Coronet 500’s. Our 1966 Dodge Hemi Coronet 500 is a 2-door hardtop with heavy duty Torqueflite automatic transmission.

It is thought that the Coronet 500 model which came out in 1966 was named after NASCAR’s Daytona 500 race. The Coronet 500 was the sporty model Coronet with front bucket seats standard, special  trim level inside and out, and specific wheel covers. The R/T trim level package did not come along until 1967. A front fender emblem denoting 426 Hemi was the only warning you would get that you were up against the might Hemi Mopar.

Conceptcarz.com broke it down this way in their article on the 1966 Dodge Coronet. “Approximately 34 [426 Hemi engines]were installed into the ‘base’ Coronet 2-door sedan (coupe), 49 into Coronet Deluxe 2-door sedans, 288 (some sources say 256) into Coronet 440 2-door hardtops, and 340 into Coronet 500 2-door hardtops. Of the 340 in the 500, 135 were WP23H6 Coronet 500s equipped with a Hemi-matched A727-B TorqueFlite automatic with console. Additionally, it is believed that 21 Coronet convertibles with the Street Hemi were built in 1966, included 12 Hemi Coronet 500 convertibles with four-speed transmission.” 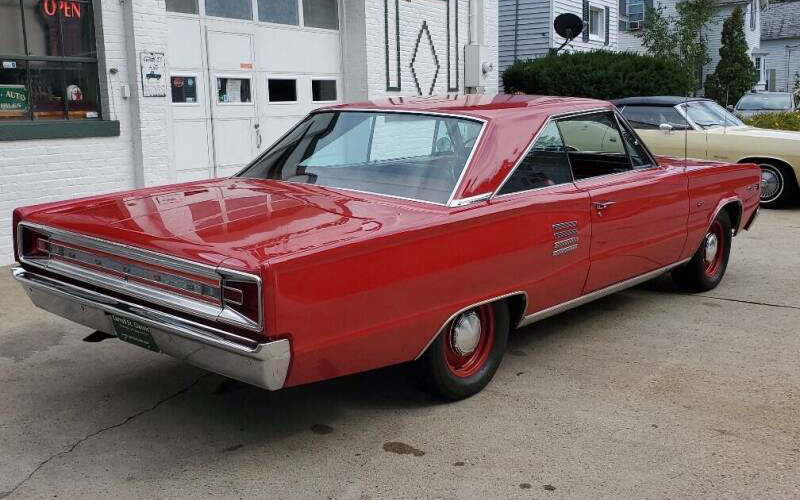