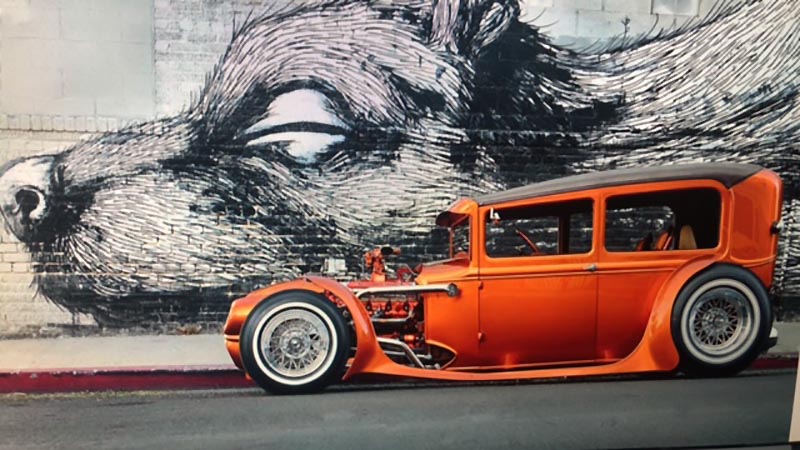 “Like looking into a mirror to really see yourself” … That’s what this 1930 Ford Model A Hot Rod called “Rod Riguez” reminds us of. That’s because this American hot rod tribute was not built here in the U.S. It was custom fabricated by a Japanese hot rodder who had studied American custom car culture. More of an art form … a classic sculpture in metal … art in motion is what it is. This 1930 Ford Model A Hot Rod has something edgy about it. People seem to “get it” right away. In fact, there are volumes of information about it on the internet and on You Tube.

“The thing that I love about this car is that it is a one-off,” says Chuck Schauecker, the current owner of the Hot Rod Model A called “Rod Riquez.” “It’s the only one like it in the entire world.” He has had a ball owning this popular show car for the past 16 years. “It has dramatically changed my life,” he told us. “I get to go places, and the people I meet … it is unbelievable.” It seems that everyone wants him to bring “Rod Riquez” to their car show. He says the car gets him in on some interesting experiences.

For instance, next month the car will have a cameo appearance in the new Bradley Cooper movie Licorice Pizza scheduled to make its premier in November of 2021. Chuck even was asked to be an extra in the movie. 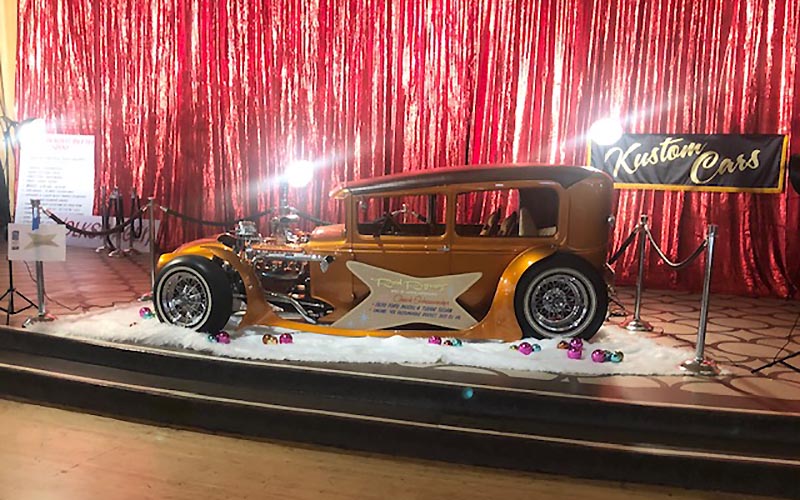 “Rod Riguez” on display at the Palladium Theater in Hollywood for the upcoming Licorice Pizza movie.

This week Chuck put “Rod Riguez” up for sale in the Cars-On-Line Street Rod Section. You will find it listed under 1930 Ford Customs. Talk about provenance, this car has it in spades.

Some years ago now “Rod Riguez” was built by Junichi Shimodaira at his shop called Paradise Road in Nagoya, Japan. Junichi was a student of famous American hot rod builders in the tradition of George Barris and Ed Roth. A skilled custom fabricator at 61 years old, he is said to be one of the founding fathers of the Japanese lowrider scene.

It was in 2002 that Junichi started a ground-up build based on a 1930 Ford Model A Tudor. With a definite 1960’s show rod vibe, it made its debut at the 2003 Mooneyes Show in Yokohama where it won Best of Show. That show put Junichi and his Paradise Road hot rod shop on the map for custom car fans in Japan. He continued to tweak the car as it won many other awards, including the Gene Winfield pick award, The Street Rodders award, and Herb Martinez award. 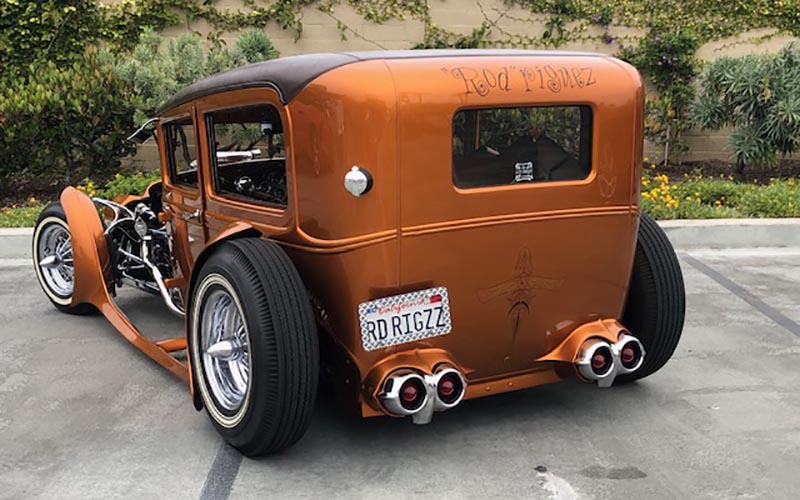 The frame is z’d and boxed front and rear. He used a TCI dropped axle front suspension with GM disc brakes. The rear end has a Chevy 10-bolt posi with airbags. The Candy Gold paint still looks amazing today. The pinstriping was by Makoto.

With a 4-inch wedge chop, the body was further channeled 8 inches, with reshaped cowl and shaved vent, recessed firewall and radius rod cut outs. The custom made grille is Junichi’s trademark. He used ’59 Caddy bumpers for the front headlight housings and ’58 Chevy running lights in the rear are made from a Chevy grille. The hand formed steel fenders are like no others, hand-crafted and uniquely sculpted without running boards,  they give the illusion that they are floating.

Junichi saw his dreams come true when he brought “Rod Riguez” to the Grand National Roadster Show in Pomona in 2005, then drove it to the Paso Robles Cruisin’ Nationals that year. The Japanese rod drew big crowds wherever it went. Before he went back to Japan Junichi sold the car to Chuck Schauecker in California.

Chuck likes the open engine design on “Rod Riguez.” “When that 303 ci V8 came out in 1949 it was one of the hottest engines around,” he remembers. The headers were chrome built with rib outlets.

One of the best videos on You Tube about this car is from the Rodder Files. Click the video window below to view.

Actually Chuck always says, “I don’t feel like I own it, it’s merely in my possession until I pass it on to someone else.” So the dream car will live on in someone else’s collection.

Click here to review Schauecker’s ad for the Model A Ford called “Rod Riguez” on the Cars-On-Line website. Few cars have gotten as much attention as this one.