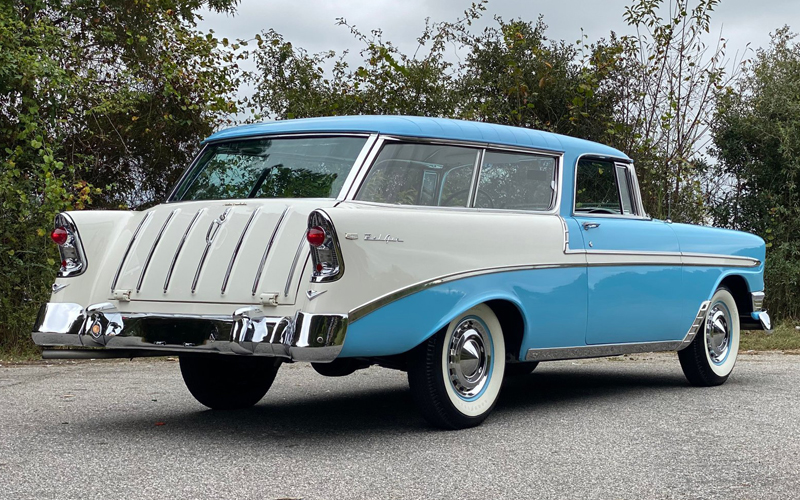 History tells us a “Nomad” is a rugged journeyor to whom life is a road trip, constantly in search of the next adventure. In the classic 1950’s Chevrolet came out with their perfect traveler, the Chevy Nomad, born to travel the backroads of America. We remember them as becoming icons of the surfing culture on the West Coast of the USA. For Baby Boomers today the Chevrolet Bel Air Nomad represents a step back in time to where the long roofs were a connection to their youth.

This week, Carolina Muscle Cars, a classic car dealership from Benson, North Carolina, listed a 1956 Chevrolet Bel Air Nomad in the popular code 707 colors of Nassau Blue over Indian Ivory. A marvelous two-tone combination, the colors were original to this car. (See the photos of the Trim Tag on the ad page.) The stunning repaint to the original color was part of a frame-off restoration expertly done. The interior was all redone in the original black and white two-tone colors.

This car is one of 30 from what Carolina Muscle Cars calls the “Eastern Collection.” They are selling this collection for their client who traveled the country in search of the finest classic cars in America. Each of these treasures measures up to the quality of this Bel Air Nomad.

If you look at the ad photos you will see a shot of the odometer. It reads 22,233, and the tumblers on the odometer are so straight and true that you have to believe that these are the original miles.

They tell us this 1956 Chevrolet Bel Air Nomad idles very smoothly and performs well, riding and handling as a classic 1950’s car would. Powered by the correct 265 cubic inch engine and backed up by the power glide Automatic transmission, they tell us the Nomad is “mechanically ready for a road trip and cosmetically ready for the show field.” The options include a Powerglide automatic transmission, full disc wheel covers, wide white wall tires, an AM radio, Chevrolet floor mats and the period correct tissue dispenser. 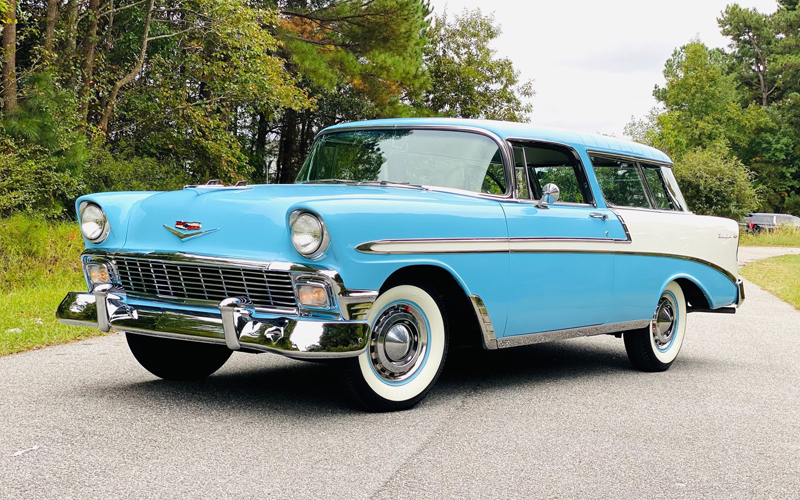 So, What is a Nomad?

When Chevrolet showed off a Corvette station wagon during the 1954 GM Autorama the idea was a big hit. What’s not to like about a two-door hardtop sport station wagon? You see, it was back in the 1950’s when Harley Earl had the idea of creating a two-door station wagon for a post-war American new car buying public. Earl was General Motor’s chief of design. They ended up calling the wagon a Nomad when it went into production. It was based on the top-of-the-line Chevrolet Bel Air.

I’ve often wondered how it came to be that this concept became so popular, or what Harley Earl saw that made him think people would take to it. After all, in 1955, the first-year Chevrolet Nomad did not sell exceptionally well as a new car. The problem with the Chevy Nomad back then was the price. At $2,571 apiece, it was the most expensive Chevrolet passenger vehicle produced (save for the Corvette.) Chevrolet was a little disappointed that they only sold 8,386 Nomad wagons that year, even though it was rushed into production at mid-year based on its popularity in the GM Autorama series. Sales continued to decline for ’56 and ’57.

But today it is genuinely revered by car collectors. What happened in between was the surfer culture on the West Coast of America. Those long roofs were perfect for carrying the surfing long boards of that era. So the Chevy Nomad became synonymous with surf boards, beach movies and the youth culture that the Baby Boomer generation grew up with. It was a story written on Hollywood movie screens with Frankie Avalon and Annette Funicello “trending” in the 1950’s. By the 1960’s the Beach Boys were writing songs about it.

The Nomad also looked different from other station wagons. The rakish look of the Nomad is its most endearing quality. With its hardtop styled door and the sloping B-pillar, it has a most unusual look from the side view. The roof is ribbed and it has wrap around rear side glass. The rear wheel well design simulated a cutout look. The rear seat folds down to create more cargo space. Then there is the unique back door which was divided horizontally so the top half would swing up and the bottom fold down. And you could order it with air conditioning.

Chevrolet produced 8,103 Nomads in 1956. Most options were standard on the 1956 models. Of all the Tri-Five Chevrolets produced, the Nomad is the most rare.

As you pan through the photos on the Carolina Muscle Cars ad page it will take you breath away. You have to admit it takes a good picture. What is so impressive about this particular classic Nomad is that it is so authentically original.