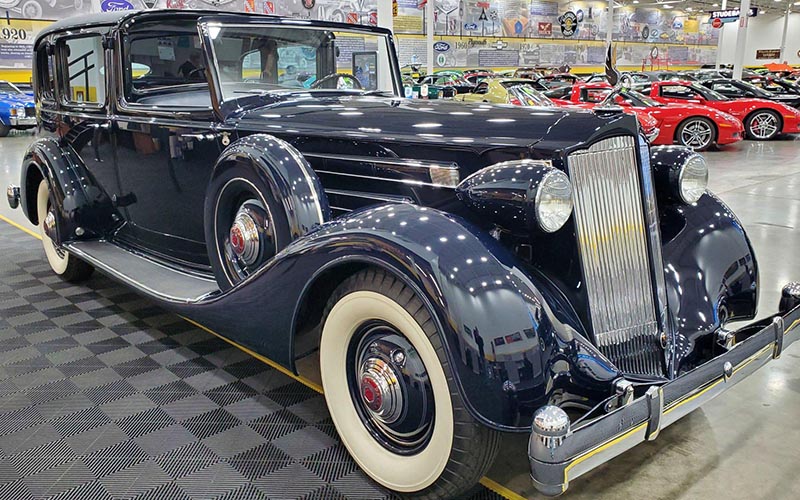 Looking over the long hood of the 1936 Packard Twelve 1408 Town Car, a chauffeur would have had the exceptional experience of piloting this 144 inch wheelbase classic from an open cab. There is nothing like the elegance of an open cab limousine to identify historic significance. This car has it all, rare, significant and with provenance.

Packard built 682 V12 cars in 1936. Most of the factory Twelves were bodied at the Packard plant, but a handful were coachbuilt by Lebaron or Deitrich. The Packard Twelve presented here is one of approximately twenty-four 1407 and 1408 chassis ordered with elegant formal coachwork by LeBaron for the 1936 model year. The L-295 Town Car was considered a limousine with seven-passenger capacity because of the jump seats in the passenger compartment. Town Cars were sold new in 1936 starting at $4,485. That was very expensive for the day. But this particular Town Car cost even more. Purchased during the worst days of the Great Depression, this custom-bodied, long- wheelbase Packard commanded a staggering $6,850 price tag, some $2,000 more than the average factory-bodied Twelve.

On January 28, 1936, the Packard Town Car pictured here was sold by the Packard Motorcar Company of Boston, Massachusetts. The exclusive 1408 chassis was done in the All-Weather Town Car (Style L-295) coachwork by LeBaron. As indicated by the Packard Vehicle Number, 295-203, this car is the third example produced in the limited series. After remaining on the East Coast for many years, the Packard was acquired by a collector in San Diego, California, who planned on restoring the aging car as a Dual-Cowl Phaeton.

In 1992, Tom Moretti rescued the grand Twelve from that dubious fate and, today, this lovely Town Car is one of only three examples known to survive. Having returned to Illinois with his latest project, Mr. Moretti began a five-year, body-off restoration with the goal of presenting the rare Packard at Pebble Beach one day.

During disassembly, stamped serial numbers were found throughout the coachwork. Researching original 1936 Packard catalogues, Moretti refinished the LeBaron coachwork in the factory-correct dark blue, complemented by matching wheel covers and whitewall tires. Inside, the passenger compartment was expertly reupholstered in blue-gray broadcloth sourced from the UK and, in front, the driver’s compartment was correctly upholstered in dark-blue leather.

As would be expected of an expensive coachbuilt town car, this Packard is brimming with exceptional details, such as a beautiful Jaeger clock in back of the division.

The restoration work took 6 years to fully complete and was a body-off restoration. Unique Classic Cars will tell you that the underside of this car looks as good as the top. Powered by the 175 hp 473 L-head V12 under the hood it is paired with a 3-speed manual transmission. The 473 cubic inch L-head twelve cylinder engine had four main bearings, a Stromberg-Duplex carburetor conformed in a standard 6.0:1 compression ratio. It produced 175 bhp at 3,200 rpm. A thermostat under the hood opens up louvers which allow more air to enter the engine compartment. This is still functioning on this vehicle. The 473 cubic inch side-valve twelve cylinder engine was refined, powerful, smooth, and quiet. The Packard V12 is a delectible work of art among engines.

Here is a walk-around video published by Unique Classic Cars on the 1936 Packard Twelve 1408 Town Car. Click the video window here to view:

The transmission is a three-speed selective synchromesh transmission with a single plate clutch and floor shift controls. As you would imagine, it came from the factory with 4-wheel vacuum-assisted mechanical drum brakes. The front suspension used a beam axle with semi-elliptical leaf springs and shock absorbers. The rear axle was live with semi-elliptical leaf springs and shock absorbers. All of this is still true today.

Dual side-mount spare tires with matching covers give a stately look. Riding on color matched wheels with center caps and white wall tires, the Town Car has about 1,000 miles on it since the restoration. It has a limousine style glass partition between the front and rear seats which rolls up and down smoothly. The passenger compartment has jump seats, Jaeger clock, and an intercome system with a button by the rear window. The carpeting was sourced from the United Kingdom to match the correct specifications of the original Packard interior.

The finished LeBaron Town Car made its debut showing at the 1997 Pebble Beach Concours d’Elegance where it was featured in a competitive class of closed, custom-bodied American classics. It took First in Class at Pebble Beach. Subsequently, In 1998, the Moretti Packardd All-Weather Town Car earned First Place in Primary at the CCCA Annual Meeting, a First Place in Senior division at an Indiana Grand Classic and a First Place in Premier division at a Michigan Grand Classic. In addition, the Town Car also won the Warshawsky Best of Show award at the Annual Meeting in San Antonio. Later that year, the Packard received Best of Show at the Burn Foundation Concours, Best Restored at the New Hampshire Concours and an AACA National First Prize. In 1999, it received the prestigious AACA President’s Cup Award which honors an outstanding restoration of a 1921-1942 automobile. Beyond these honors, this classic earned a First in Class at the 2006 Amelia Island Concours d’Elegance and Outstanding Formal Car at the 2010 Geneva Concours d’Elegance. Its striking proportions, elegant features and tasteful appearance make it a particularly stylish formal classic and its impeccable credentials are sure to impress the most discriminating collecto

One thing we noticed. The asking price for this historic Packard Twelve 1408 All-Weather Town Car is very reasonable. They are looking to get $249,000. We looked it up, and the recorded average sales prices on 1936 Packard Twelves is $385,000. This L-295 model with the open cab is one of the rarest with coachwork by LeBaron.

Due to the limited production figures, the stately coachwork, and mechanical prowess, the twelve-cylinder Packards rank among the most collectible and desirable vehicles of the 1930s. It is considered by many to be one of the finest automobiles produced by Packard and one of the most significant creations of the classic car era. 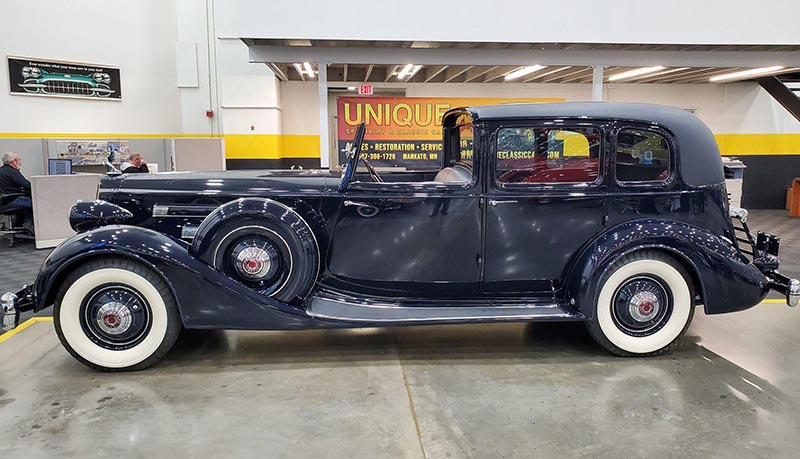 It might be of interest for our readers to note that Unique Classic Cars is a classic and specialty car dealer located in Mankato, Minnesota. The business has grown so much over the years that they have become a virtual classic car wholesaler. Their inventory of collectible cars at any one time is huge.