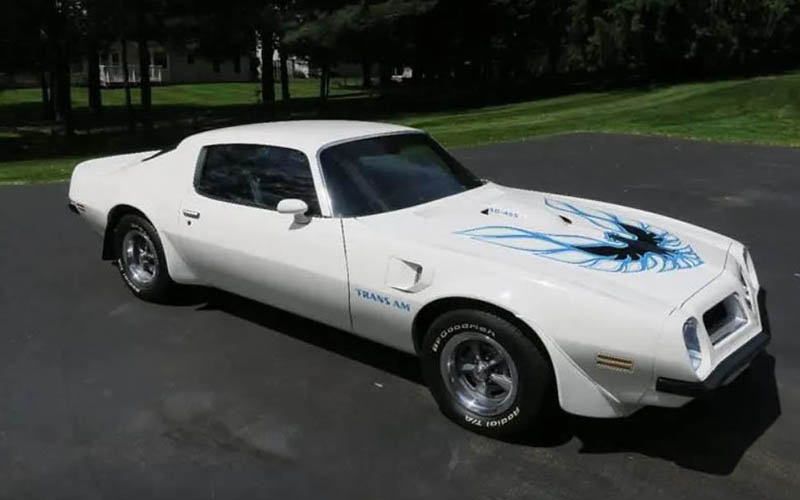 When the muscle car era was drawing to a close, Pontiac was one of the holdout car companies clinging to the performance era with their Trans Am pony car. The last of the breed was the 1974 Pontiac Trans Am Super Duty 455. It was the last great American muscle car.

The 1974 Pontiac Trans Am Super Duty 455 you see pictured here is being offered for sale by Eric’s Muscle Cars in Maryland. It is the rarest of the rare, because it came from the factory with a 4-speed. In 1974, total production on the Pontiac Trans Am Super Duty 455 was 943. Just 212 SD-455’s came with the manual transmission. (There were also 58 1974 Pontiac Firebird Formula SD-455’s built.)

The Cameo white Super Duty has undergone a detailed restoration, according to the ad copy from Eric’s Muscle Cars. They tell us it has just 34k documented miles. Moreover, it comes with a build sheet, window sticker, warranty booklets and manuals. They even have a copy of the original title. The restoration has maintained its black interior in excellent condition. (Find dozens of photos at this link.)

The options on this Super Duty Trans Am include a close ratio 4-speed, console, power steering, AM, 8 track, gauges, and a tach. The suspension was what they called radial tuned. It has power disc brakes. And it came with a 3.42 posi rear end. You will note the Rally II wheels in the photos.

You can hear the big 455 ci V8 Super Duty motor in the video produced by Eric’s Muscle Cars. When the motor was rebuilt during the restoration it was “juiced up” and you can hear that lopey cam in the video. (Click the video window below to view a walk-around tour.)

At a time when Plymouth Cudas, Corvettes and Chevelles were being de-tuned because of insurance costs and emissions controls, the Trans Am was the only American sports car that continued the muscle car tradition. The TA will always be remembered for its spectacular handling ability. In the post muscle car era, the Super Duty Trans Am with its legendary SD-455 was the one muscle car left that kept the American passion for performance alive.

Eric’s Muscle Cars is an internet broker service which helps collectors sell their cars. A member of the Cars-On-Line Dealer Network, Eric’s Muscle Cars has been serving muscle car enthusiasts for many years. They have the capability of providing you with a pre-purchase inspection on their cars.