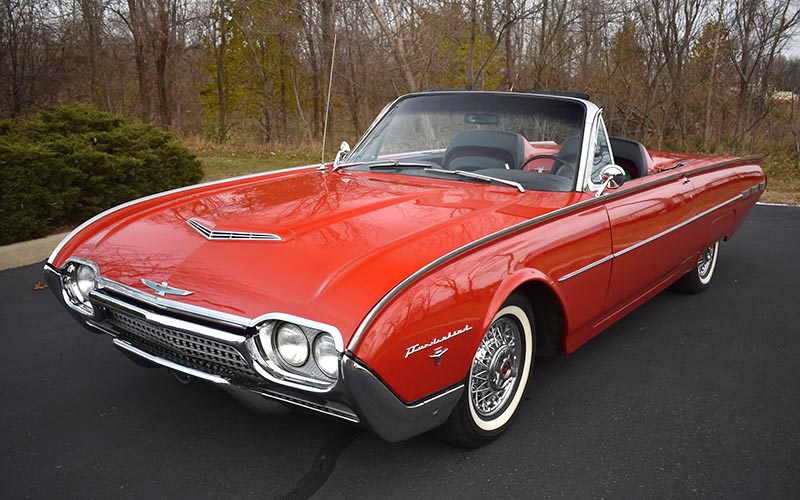 The years 1961 through 1963 were a turning point in the development of the Ford Thunderbird. During the third generation of the Thunderbird it became a true personal luxury car with Ford innovation and a stylish maturity that appealed to all generations. The most notable of these early watershed T-Birds was the 1962 Ford Thunderbird Sports Roadster. Wow! That two-seater version of the Thunderbird is still revered by car collectors today. With a long and low bearing, the fiberglass tonneau cover creates the iconic rear view look that makes this car so famous.

This week, a 1962 Ford Thunderbird Sports Roadster has been listed for sale by Rock Solid Motorsports in Elkhart, Indiana. Finished in a beautiful and classic factory color code “J” Rangoon red, they rate the exterior as being “in very good condition.” (Click here to see dozens of detailed photos on the ad page.) Not to be considered show quality, they say the paint has a nice shine but you can see where there have been some touchups. They say the chrome and stainless are overall nice, but it does have some minor wear. Factory fender skirts have been added after-market. They say the body, frame and floors are dry and rust free. Still retaining the original black leather upholstery, the interior is in good overall condition. You can tell from the photos that the interior cleans up well.

New for 1962 was the 390 ci V8 big block. The new engine came standard on all Thunderbirds as did power steering, power brakes, bucket seats and a console. This car has the optional power windows and power drivers seat.

Take a test drive with Rock Solid Motorsports to see how this Sports Roadster handles on the road. Click the video window below to view.

Thunderbirds were famous for their swing-away steering wheel. That was another Ford innovation that wowed the new car buyer. Watch the video to see how the convertible top folded into the trunk compartment ala the Ford retractable of the 1950’s.

The base Thunderbird unit sold well in 1962. Ford sold 78,000 T-Birds that year, including 9,884 convertibles. The Thunderbird Sports Roadster was a special production version of the Thunderbird with only 1,427 produced. Even more rare were the M Code 390 Sport Roadsters with the Tripower induction. There were only 120 of those produced.

Because there were so few of them produced and because of their hefty MSRP (factory price tag) these 76 B Code Sport Roadsters were highly regarded back when they were new. The MSRP on this trendy sports convertible was $5,500. They came standard (as did all Thunderbirds that year) with the new for ’62 Ford 390 4-barrel mated to a Ford Cruise-0-Matic automatic transmission. 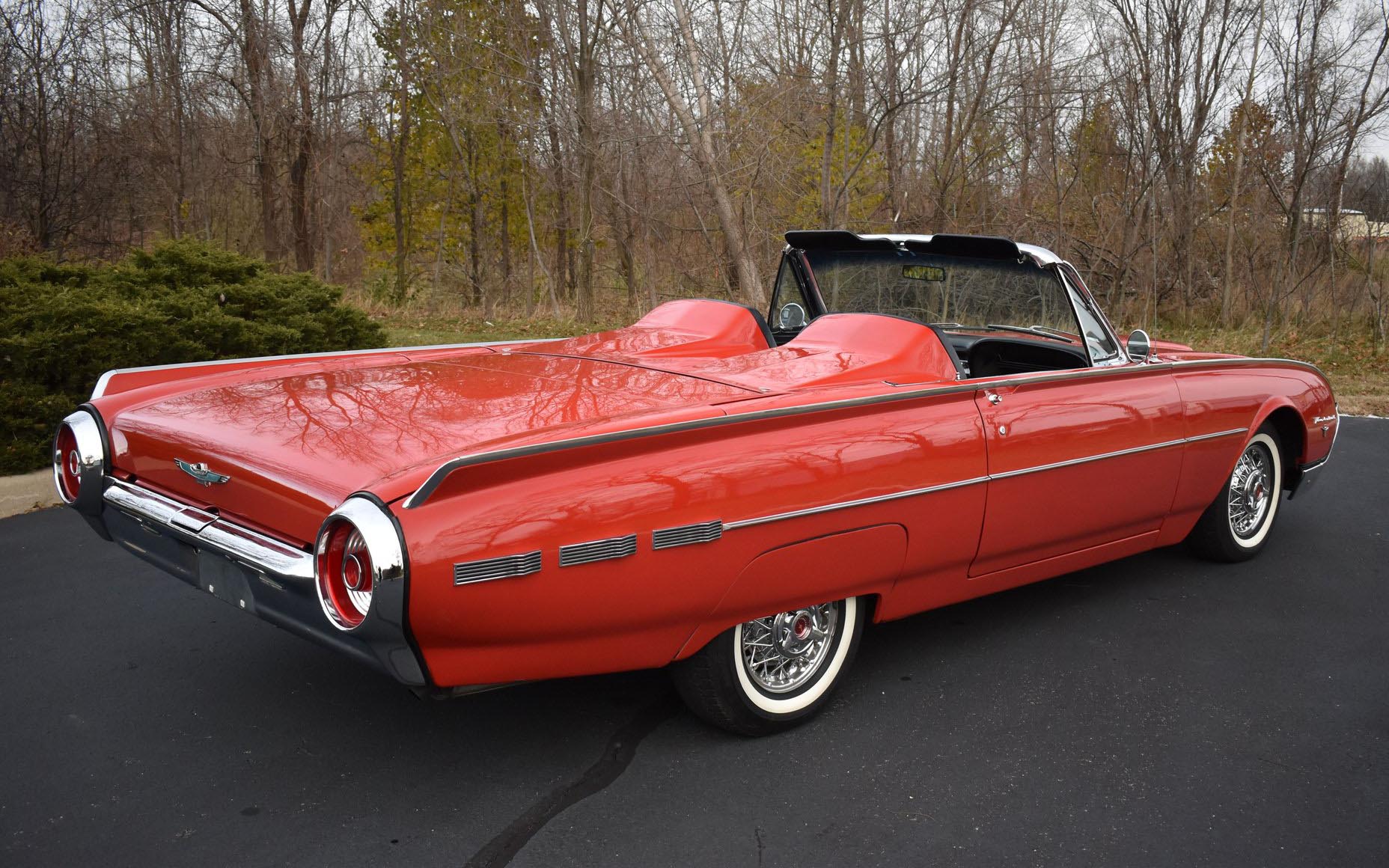 The salient feature of the Sports Roadster was the ABS plastic tonneau that fits over the rear seats, effectively creating a streamlined two-seat roadster from the four-seater. So you had the utility of a larger 4-passenger car that could pass for a two-seater sports car. The Sports Roadster package also included the 48-spoke chrome wire wheels with imitation knockoff spinners, and a grab bar on passenger side over the glove compartment.

There is some thought to why the 1962 Thunderbird Sport Roadster was so popular. During the 1961 inaugural parade when President Kennedy was elected, they brought 50 of the 1961 Thunderbird Convertibles to Washington for the parade. Presumably that was because Kennedy had selected Ford executive Robert McNamara to be Secretary of State. The effect of having those beautiful convertibles at such a high profile event brought a lot of luster to the third generation Thunderbird. Maybe that’s why they sold so well that year. But it was also well known that President Kennedy owned a 1961 Ford Thunderbird Convertible himself and was very found of the styling. That probably had a positive effect on sales of Thunderbirds for 1962.

Some of the technology Ford invented for the retractable hardtop during the late 1950’s went into this Sports Roadster. Watch the video below to see the roof go up and down.