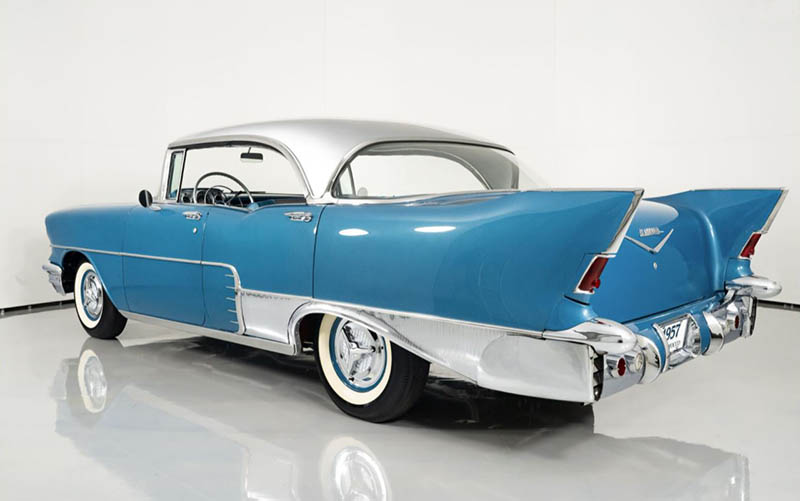 The Chevrolet El Morocco, a notable footnote in history, once aimed to compete in the lofty Cadillac luxury car market. Although it was a fly in the ointment at General Motors Corporation, it was a flicker of light for the American new car buyer, even if it only lasted briefly.

“Everybody wishes he had a Cadillac,” said Ruben Allender, a millionaire businessman who made his money selling Army surplus goods after the war. “But they can’t afford it. So, I believe I can build one out of a Chevrolet.” That was not just an idle remark. Allender actually tooled up to produce such a car, half Cadillac and half Chevrolet, built on the Chevrolet chassis and called the Chevrolet El Morocco.  Allender enlisted the help of the automotive aftermarket stylists at Detroit’s famous Creative Industries. The Chevrolet based car had many of Cadillac’s attributes, with emphasis on the legendary Cadillac fins.

You see, Cadillacs would cost about $4,700 at the time. Whereas,  the Chevrolet El Morocco two-door (without air-conditioning) was about the same price as a similarly equipped ’57 Oldsmobile Rocket 88 Holiday, or about $3,600. Allender wanted to produce luxury cars for the masses. He knew he could do it for about $1,000 less than GM’s top car, the Cadillac. In the first year, he built 18 cars with a 1956 base Chevrolet Bel Air body and chassis. For the 1957 models of the El Morocco he used a modified Chevrolet 210 Post. The Post was slanted backwards like on a Nomad. Only fifteen 1957’s were produced. Oddly, although there were less ’57’s built, there are fewer 1956’s that have survived.

Today, car collectors are fascinated with the El Morocco story and a very few of the original cars are still in existence. This week, Fast Lane Classic Cars out of St Charles, Missouri posted this 1957 Chevrolet El Morocco Brougham 4-Door Hardtop in our Chevrolet Section for sale. Be sure to view all the detailed photos here on their ad page. It is an amazing piece of automotive history.

Click the video window below to view a walk-around inspection of the 1957 El Morocco produced at Fast Lane Classic Cars.

The color looks to be Bahama Blue with a blue and white two-tone interior. All of the El Moroccos were said to have 1957 model year Cadillac colors. It has the 283 ci Chevrolet engine with a 2-speed Powergide transmission. Fast Lane Classic Cars tells us it has been fully restored and it looks it from the photos. Note the detailed engine compartment and undercarriage. It has power steering and an AM radio. 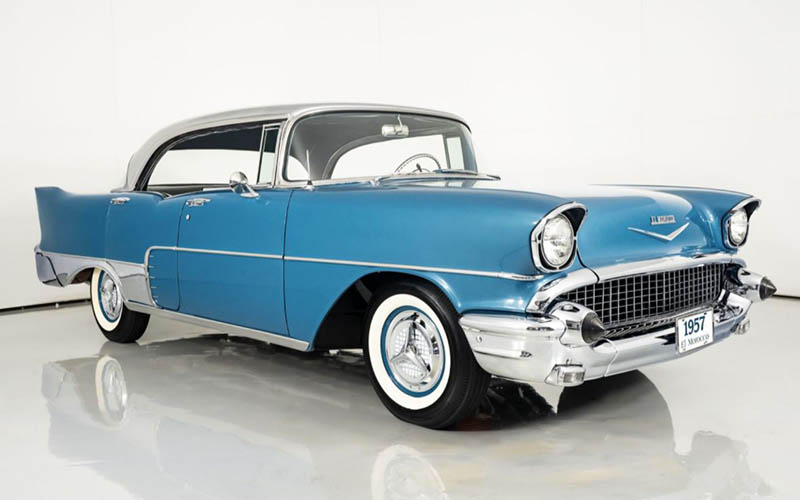 How the Chevrolet El Morocco Came To Be

The Chevrolet El Morocco was a customized full-size car produced by millionaire Canadian businessman Reuben Allender based on the 1956 and 1957 Chevrolet. Allender was a self-made millionaire whose entrepreneurial enterprises were notable. He got his start after World War II by reselling Army surplus goods from the war. He was known to his friends and family as someone who could make money out of things other people would discard. He was also a long-time Cadillac owner who appreciated what the luxury car meant to America. He figured everyone wanted a Cadillac, but few could afford one. His ambition was to build a lighter, smaller version of the Cadillac for the masses.

That is how he got into the automobile manufacturing business. So he took his ideas to Creative Industries in Detroit, a company known for doing aftermarket customizations for Detroit manufacturers. A Motortrend story from 1956 said a fiberglass expert was hired to retrofit the parts. Allender used fiberglass and lead fillers as he blended Cadillac’s nose, hood, rear quarter-panels, side panels and fins for the smaller Chevrolet body and chassis. He replaced Chevrolet emblems with “El Morocco” logs.

When the El Morocco first came out the brochures said, “furnish your own.” You could order them the way you wanted them. The prices of the El Morocco ranged from $3,125 for the two-door El Morocco Brougham hardtop,  to $3,175 for the four-door, and $3,275 for the convertible. They said you could get anything Cadillac offered for an extra $775.

All El Morrocco’s were modified and re-painted 1957 Cadillac colors. They were all Chevrolet Bel Air based in 1956. But in 1957 they used the 210 Post cars as a base car which was modified. Although they were mainly built with Cadillac-style body parts, Allender also grabbed stock parts taken from Willys and Dodge.

There was even an El Morocco El Camino. Chevrolet did not start building the El Camino for production until 1959 but it has been confirmed that one El Morocco El Camino was produced with the 1957 models. There is a story out that it was made from a prototype obtained from Chevrolet. However, it used the Nomad body for the base car. The engine was always a 283 ci V8 with a 4-barrel Carter carburetor. It was rated at 220 horsepower at 4800 rpm.

One Motor Trend Magazine reader more recently had an inciteful note about the El Morocco. He said it was “a fascinating take on the egalitarian ideal of luxury for the masses.” But GM had other plans for their multi-layered marketing strategy and wanted Cadillac to remain a dream for the average guy. It may be said that their marketing strategy depended on an economic class structure.

Of the original 34 El Moroccos that were produced, it is thought that only a handful might still exist. It is interesting to speculate on why car collectors are so fascinated by these few remaining El Morocco classics. We know of 10 which still exist; we think that there are only four 1956 models. There are six 1957 cars; two 4-door sedan Broughams, tw0 2-Door sedans and two convertibles.

We were lucky to stumble upon the Heritage Collection display at the Tri-Five Nationals in Bowling Green, Kentucky in 2018. There we feasted our eyes on the biggest display of Chevrolet El Moroccos ever.

One known collector from San Diego owned three of the El Moroccos when we first met him at the Bowling Green Tri-Five Nationals. Here is an interesting interview with him done by Bob Boberg of eClassicAutos on his website. The owner is Marv Seisl who has become an expert over the years.

Needless to say, when GM found out about the El Morocco they were none too pleased. It is thought that they may have brought pressure on Allender to end his quest to produce the “affordable American luxury car.” But it was more likely that his private funding for this enterprise ran out of money. Much like Preston Tucker earlier in the late 1940’s, Allender just had to walk away.