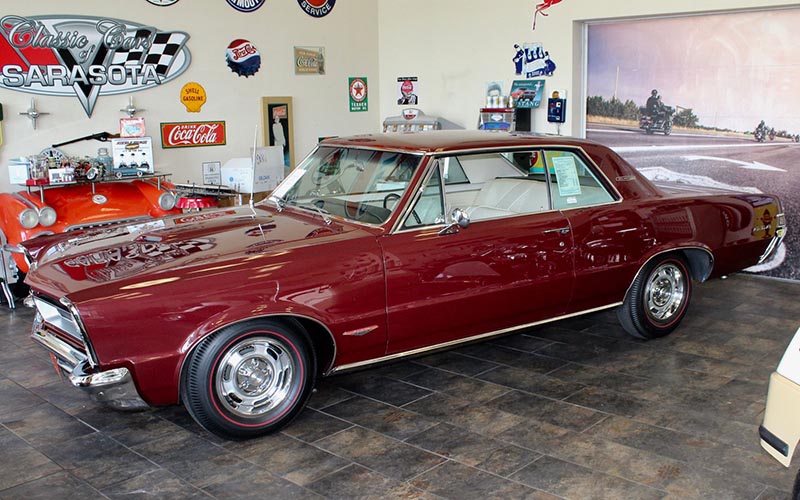 Pontiac collectors will be riveted to this page this weekend. An amazing 1965 Pontiac Royal Bobcat GTO has emerged on the collector car scene in full concours show condition. It may be the rarest classic muscle car we’ve seen this year. The Royal Bobcat name holds a lot of value to the Baby Boomers who followed drag racing back then.

Back in the day, Royal Pontiac out of Royal Oak, Michigan was the closest Pontiac dealership to the actual Pontiac plant. Because of their proximity to the plant they benefitted from a close association with all the engineers and often were used as a “test mule” by the performance buffs at Pontiac. Royal sponsored their own racing team called the Royal Bobcats. Much of their racing technology was available to GTO buyers in their shop. They even produced their own performance tuning kits which you could buy out of their catalog. Their parts department became famous nationwide.

Suffice it to say that if you bought a GTO from Royal Pontiac you could have it tuned to go racing with the best of them. For instance, you could buy a Pontiac GTO 389 Tripower and have it delivered at the dealership with a 421 ci V8 in the trunk. Royal would replace the 389 with the 421 Super Duty with hardened internals and add their performance modifications. You could even get a warranty on the modified GTO. If you bought one from Royal Pontiac it was referred to as being a Royal Bobcat GTO because it was basically tuned by members of the Royal Bobcat racing crew.

Having said that, we noticed that Classic Cars of Sarasota just listed a 1965 Pontiac Royal Bobcat GTO for sale out of their Sarasota, Florida showroom. What a find! (Click here to review their ad and see more photos.) They say it is the real deal. Pontiac collectors know how rare these Royal Bobcats are. And this one may be the best restored Royal Bobcat on the planet.

You have to watch this walk-around video by Classic Cars of Sarasota. (Click the video window below to view.)

They say that Royal Pontiac replaced the 389 original from the factory with a 421 ci V8, and that it was built with all period factory parts. And they say it is the nicest restored 1965 Pontiac GTO they have ever seen. Near flawless. Everything looks fresh and new. They have the paperwork, they say. It even has the correct factory inspector markings. This is as close to a real trailer queen as you can find.

They say this car has a 421 ci stroked to 500 ci with the high flow 421 exhaust manifolds, steel main shaft in the transmission, boxed rear control arms with girdled 3.90 posi rearend and all the Royal Bobcat extras, i.e., better springs, better fans, HD cooling system, and suspension. The interior with the Hurst shifter and factory tach is just as Royal Pontiac would have set it up. It does have power steering and power brakes. The car is as straight and detailed as you can find. It probably looks better than when it came from the factory.

Royal Pontiac is where a car was prepped for the famous Car And Driver magazine story that pitted a Ferrari GTO against a 1965 Pontiac GTO. The Pontiac won in a quarter-mile runoff. The story was so popular back in the day that it made Car And Driver magazine a household name among car enthusiasts. That car came from the Royal Pontiac dealership owned by Ace Wilson, Jr, and the rce was arranged by Jim Wangers, famous Pontiac Performance promoter. Yet, after the muscle car era died, the dealership folded. Unfortunately a lot of the records have been lost.

It is rare today to find a documented GTO from Royal Pontiac. You see, a GTO that had been sold at Royal Pontiac is the equivalent of a Dodge Challenger sold at Grand Spaulding Dodge in Chicago. The collector value goes up because of the name.

This car was first seen on the internet when a video was done by Horsepower Warehouse. They were so impressed with it that they went all through the car. Take a look.