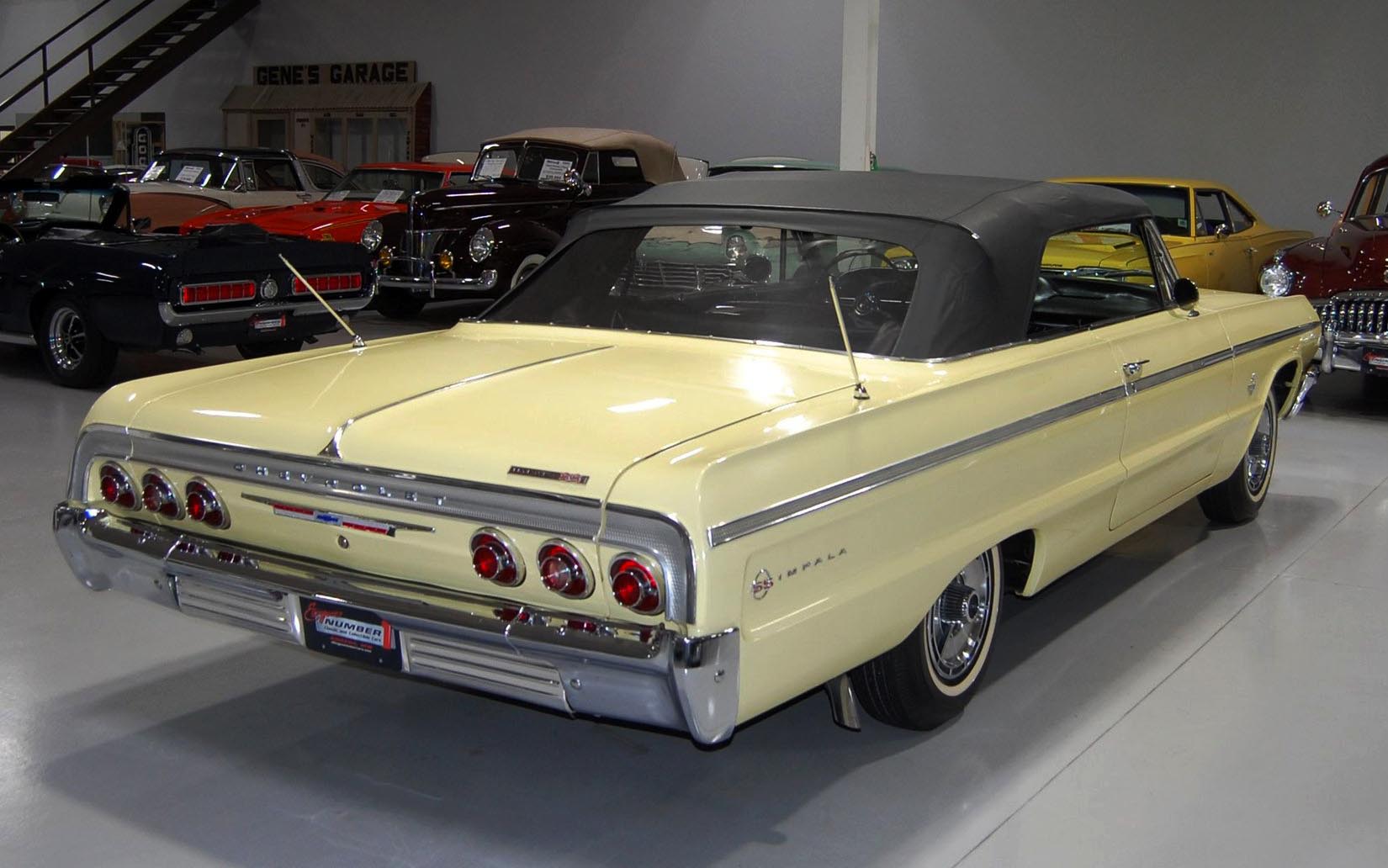 It may have been the perfect example of a “blue collar” muscle car. Even if you were not a Chevrolet fan back in the day you knew there was something special about a 1964 Chevrolet Impala SS 409 Convertible when you saw one. The engine turned aluminum trim, the SS wheel covers and the Impala emblem centered in the back seat … yeh, there was something special about that car.

Those days will all come back to you when you sit in this Goodwood Yellow 1964 Chevrolet Impala SS 409 Convertible being offered for sale this week at Ellingson Motorcars in Rogers, Minnesota. (Look through dozens of up close and detailed photos at the link here.) It is a true Super Sport which has been painstakingly restored. The undercarriage photos tell you the level of quality of restoration work here.

Whoever ordered this car originally really knew how to order a new car. The Impala was the top-o-the-line offering from Chevrolet. In fact, the Impala Super Sport was its own sub-category of Impala that year for the first time. (Previously the Impala SS was an option.)  This one came with a lot of options. Equipped with power steering, there is just nothing that handled better than the perfectly balanced square bodied Impala. It also has power brakes and a power top. Even though it is a convertible, this one came with factory air conditioning (a $300 option back then.) It has dual side mirrors, dual antennas and dual exhaust.

The front bucket seats and rear bench seat have been reupholstered in leather grained black vinyl, just how an SS car came from the factory  back in 1964. The padded dash, annodized aluminum dash plate, center console, door panels, and steering wheel all appear to be in fantastic condition and in their stock configuration.

Here is a fun and interesting walk-around video done by Ellingson Motorcars on their 1964 Chevrolet Impala SS 409 Convertible. Click the video window to view.

Chevrolet recorded total sales of Impalas at 536,329. Roughly 185,325 were Impala Super Sports. They think about 35 percent of the 2-door hardtops were Super Sports, or about 155,000 units, according to Hagerty Insurance. That leaves about 30,000 or so convertible Super Sports.

What we don’t have is a breakdown on how many convertibles and hardtops were SS 409 models. Because of the way Chevrolet kept or didn’t keep records, we don’t have those numbers today. Chevrolet historians who knew something about Chevrolet production, however, have surmised that about ten percent were convertibles. We know that they made 8,684 Chevrolets with the 409 motors frome the fractory in 1964. That was less than half of the number of 409 cars which were produced in 1963.

If that ten percent guestimate on convertible production holds true for 409 cars also, that would mean that possibly as few as 868 SS convertibles were built with 409 motors in total. But there is no way to actually know for sure.

The SS had its own look. It was the “sportier” model for 1963 and 1964. They had bucket seats and a center console setting that interior as the desirable combination for several generations of muscle cars. The SS had the factory in-dash tachometer. It had Impala SS badging on the rear fenders and also on the rear deck lid. It came with SS hubcaps. The silver engine turned cove insert over the triple taillights made the rear valance of the SS so distinctive.

The 1964 Chevrolet X-frame styling lends itself very well to the lowrider culture. That is why you see so many ’64 Impala lowriders.

Collectors know the legendary appeal of the big block 409 motor. Originally designed as a truck engine, the 348 ci V8 was bored out to 409. Then Chevrolet redesigned the 409 block in 1962, and the rest was history. The 409 ci V8 by Chevrolet was soon found to be the engine of choice for drag racers. The tire turning torque of the 409 when applied to a passenger car was the scourge of the drag strips. Dyno Don Nicholson came to the Winter Nationals in Florida in 1962 and cleaned house. Then the Beach Boys put their “409” song on the B side of their hit single Surfin Safari. The song is credited with putting the 409 in the American vernacular, and made Chevrolet’s Impala the car of choice for young Americans.

By 1963 GM put out their Anti-Racing Edict that stopped their support of drag racing. But Chevrolet had already made their reputation with the 409 big block. The Chevy Impala was fueling Chevrolet’s record sales in 1963 and 1964.

With so few 1964 Chevrolet Impala SS 409 Convertible examples left in existence, this one is a real treat. The restoration and careful treatment of this car make it a special find for an Impala Super Sport collector.