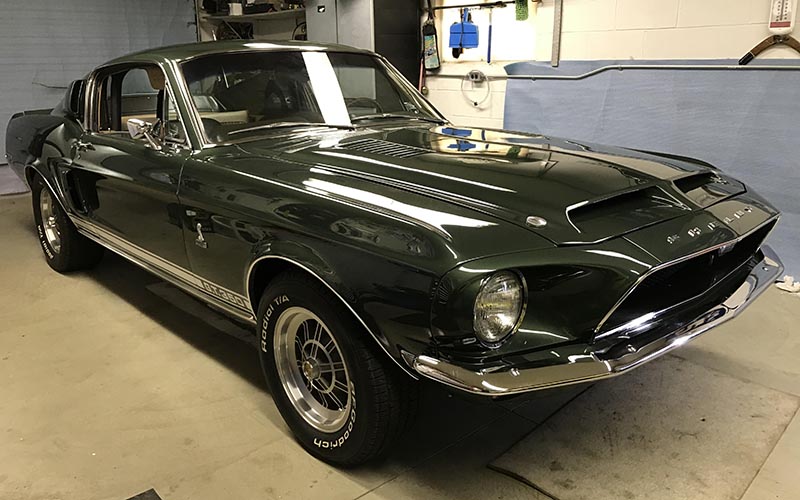 It seems funny to say it. Here is a 1968 Shelby GT-350 Hertz rental car being offered for sale in today’s collector car market. Only in the muscle car era could you imagine that a national rental car company would offer a race car in their rental car inventory. But that’s what happened when Carroll Shelby, a master salesman, convinced Hertz Rental Car Company to order his legendary Shelby GT-350 to rent to the general public in 1966. Its hard to say whether the publicity was better for Hertz or for Shelby’s fledgling Mustang GT race car.  Hertz billed it as the “Rent-A-Racer” program. It is one of the most interesting footnotes in automotive history.

The first year of the Shelby GT-350H was 1966. Hertz ordered 1,001 Shelby GT-350 street version cars with the K code Ford 289 small block motor rated at 306 horsepower. These cars still had the racing suspension that all Shelby Mustangs came with. You could rent one for $17 a day. Stories abound of how these Rent-A-Racers were showing up at drag strips all over the country. Many were returned slightly beat up.

Hertz was sold to a holding company in 1967 and the Rent-A-Racer program was scrapped. They never made a profit on it anyway. But in 1968 Hertz once again added the Ford built 1968 Shelby GT-350 to their Sports Car Club inventory. Ford had taken over production of the Shelby Mustang at that point. They were being built at the Ford plant in Michigan and assembled at Metuchen in Edison, New Jersey. For Hertz the buy in for ’68 was on a much smaller scale. The Marti Reports on these cars say that there were only 223 purchased from Ford. (Even though the Shelby Registry counts 224, small difference.) Of all the Hertz program cars, the 1968’s are the most rare.

This week a private party seller out of Canada listed his rare 1968 Shelby GT-350 Hertz Rental Car for sale in the Cars-On-Line Shelby Section. These cars are so rare that many of our readers have never seen one. Only 1,027 Shelby GT-350’s were produced by Ford that year. But the number of GT-350H Hertz rental cars was only 223, the rarest of the already rare models. The Canadian car was no sooner posted on Wednesday evening than the seller was getting calls already.  The seller says it is completely numbers matching with documentation and owner history. You can read the Marti Report on his ad page. Showing only 16,000 miles, he says it came originally from Florida. It still displays its Highland Green paint, said to be show quality according to the owner. All of the Hertz Shelby’s came with the C-4 automatic transmissions and Ford Selectaire air conditioning. The owner says he has fitted the original unit with Vintage Air. (Original compressor is available.) Look at the photos in the ad to view the saddle interior. The Shelby has a 9-inch Ford open rear end, and he says all components are stock. It has the famous argent tail panel with sequential turn signals.

According to the Marti Report, this car was well optioned. It came with Visibility Group and Interior Decor Group, tilt-away steering column, power steering and power front disc brakes.

The current owner has had the car for over 20 years.  During his ownership he had the opportunity to meet Carroll Shelby and have him sign the sunvisor on the GT-350H. It turns out that the car was produced on Shelby’s birthday, which Shelby noted when he signed the sun visor.

Ford’s changes for 1968 included the new Ford 302 small block motor. For the Shelby GT-350 it was rated at 250 horsepower using an aluminum intake and Holley 600 cfm 4-barrel carburetor. The word Cobra was added on the valve covers. As of 1968, the name Cobra now had a Mustang flavor. They advertised it as a Cobra Mustang.  Ford’s approach was a little different. Instead of racer’s edge performance, these cars now included luxury and style. Collectors will appreciate the better factory finish and accoutrements.

As the story goes, Ford bought the Cobra name from Carroll Shelby for a thin dollar. After all, Shelby had no use for it since the production of his famous little Cobra sports car had ended. This was no longer a business run by Shelby and his hot rodder friends. The Shelby Cobra legend also appeared on the steering wheel and on the fender emblems. Auxiliary gauges were present on the console. This was a well-appointed sports car.