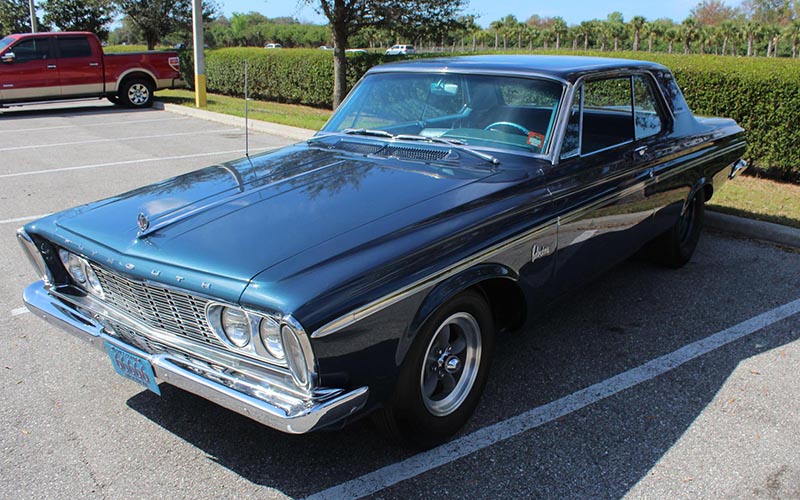 With Ford and Chevrolet unable to keep up with the technology, this 1963 Plymouth Belvedere Super Stock 426 with the Max Wedge heads won all its battles in the early muscle car wars. It was the year of the Super Sport 426 for Plymouth, and they were totally geared up to “win on Sunday” in NHRA competition.

As incredible as this 1963 Plymouth Belvedere Super Stock 426 is, the restoration on this car is even better. Oh, it has all the credentials. Galen Govier has it in his Chrysler Registry as the fifth car produced out of 15 Super Stock 426’s built at the Lynch Road Plant that March. They were all built in sequence, he says. It is also the third of seven produced with a 3-speed. The floor shifted Heavy Duty 3-speed was necessary to handle the extreme pull of the big block 426 Max Wedge motor. While most of the Super Stock 426 Max Wedge Plymouths came with push-button Torqueflite automatics, this one is even more rare because of the 3-speed manual Heavy Duty transmission with the “cue ball” shift knob.

One authority says there were 145 Max Wedge cars produced in 1963. This one is special because it was a Super Stock version. The Super Stock 426 Max Wedge motor could be ordered in Plymouth B-body models, such as the Savoy, Belvedere, Fury and Sport Fury.

Govier says the battery was relocated to the trunk on March 25 at the same time that the Aluminum Package was installed. The Stage II 426 motor was introduced in June. This Belvedere has the correct 426 Max Wedge dual quad engine affectionately called the “orange monster.”

But this would be a top level collector car even if it did not have the legendary Super Stock 426 Max Wedge motor. Classic Cars of Sarasota has listed this beautiful Mopar for sale this week. They were so pleased to get it in their inventory because they say it is one of the finest muscle cars they’ve ever posted for sale. (Find their ad description and dozens of detailed photos at this link.)

Classic Cars of Sarasota tells us this car is absolutely stunning with show quality paint. The Dark Blue exterior is complemented by the aqua blue interior. The chrome is truly beautiful. They say the glass and stainless are perfect. They describe it as a “blue chip investment quality” car. More than that, it is one of incredible historic significance. It shows 58,000 miles on the odometer. The trunk still has the original spare.

You have to view their video presentation. In their own words they tell us how impressed they are with the show quality condition of this historic Mopar.

By 1963, Mopars just about dominated the NHRA Super Stock class in drag racing. They started with the Max Wedge 413 ci V8s exclusively in B-body Mopars. The Max Wedge 426 motors made more air flow to the cylinder heads, pioneering a new technology. They have two Carter 4-barrel carburetors sitting atop the intake. With oversized valves and oversized ports, the pent up gases build up in the Wedge heads so when the intake valve opens it is like “supercharging” the engine bore. The Wedge heads produced 11 to 1 compression. When tuned just right you can boost the cylinder pressure and torque at a specific rpm. It made 415 horsepower , and it worked great for drag racing. Later, the Max Wedge was found to be not so great for NASCAR (thus the 426 Hemi came into being.)

Although they were sold to the public, the car did not come with a factory warranty. As tested in the January 1963 issue of Hot Rod magazine, a factory Super Stock 426 Max Wedge would run 12.69 seconds at 112 miles per hour in the quarter-mile right off the showroom floor. Even off the showroom floor, this car would have come with an aluminum front bumper, aluminum grille filler panel, trunk mounted battery, exhaust manifolds with 3″ head pipes and factory exhaust cutouts. You can see the factory tach in the interior photos.

The impact of the Super Stock 426 Max Wedge cars from Plymouth and the Ramcharger 426 cars at Dodge dramatically changed the NHRA drag racing scene. Ford and Chevrolet just could not keep up with Mopar innovation in this period. That makes this 1963 Plymouth Belvedere Super Stock 426 a significant piece of auto racing history.

Each week on the Cars-On-Line website you will find historic muscle cars such as this one in the Mopar Muscle Car Section. Check it often. It is updated  daily.