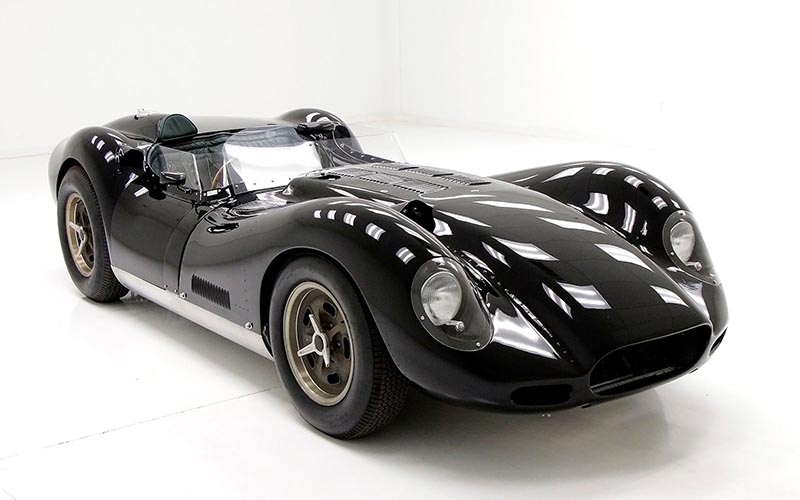 As it turns out, a car of some significance is being offered for sale on the Cars-On-Line website. A black 1958 Lister Jaguar Knobbly is thought to be one of the seventeen original Lister Knobbly Jaguars produced at Lister’s shop in Cambridge. At first blush, one may have thought the Lister Jaguar was only a replica since so many Lister Jaguar replicas come up for sale here in the U.S. Not so, says the Classic Auto Mall in Morgantown, Pennsylvania where this well restored 1958 Lister Jaguar resides, and is being offered for sale. (Find dozens of detailed photos on the ad page here.) Their story seems to back up their claim.

You see, of the seventeen Lister Jaguars which were built by Brian Lister in 1958, they think about ten of them were exported to racing teams in the U.S. The first two went to the famous Briggs Cunningham, pioneering champion of American road racing, while many others went to Jim Hall and Carroll Shelby. They put Chevrolet engines in them.

In the early 1950’s Brian Lister had some success building competitive race cars from his father’s metalcraft shop in Cambridge, England. Lister would use parts from MG, Bristol, Chevrolet, Jaguar and Maserati to fabricate and build his race cars. The 1957 Lister was constructed of a light-weight steel chassis bodied in aluminum. That year one of his clients insisted that Lister should put a Jaguar 3.4 litre XK engine in his custom designed Jaguar. When Jaguar dropped their racing program because of a fire at their Coventry plant racing teams looked to others, such as Lister, to supply Jaguar replacements. The Jaguar engine complemented Lister’s custom design, and his cars were very competitive against the Jaguar D-Types and Aston Martins. They won eleven races that year. A total of 34 of these ’57 Lister Jaguars were built. They are now legendary.

Then in 1958, Lister came up with a fresh new body style which would amaze the racing world. The beauty of the car was its undulating tail which sloped into the cockpit and curved up again along the bonnet. Because of this lumpy looking effect, it was nicknamed the “Knobbly.” It would come with Girling disc brakes and a larger fuel tank.

One of the mentor’s of Lister’s racing program was his friend, a mechanic and race car driver named Archie Scott-Brown. Scott-Brown was killed in a race at Spa in 1958. After that Lister was so disheartened that he closed his shop and discontinued his racing program. Only seventeen of the Knobbly Listers were thought to have been built. They are even more rare and desirable than the Lister Jaguars of 1957.

Since so many Knobbly Listers were sold here in the U.S., it is not surprising that one would turn up here. Chassis number BHL 113 was purchased at a swap meet in Texas in the 1970’s. It was not until 2013 that this chassis was shipped back to the United Kingdrom where it was documented to be one of the original seventeen. Later, Terry Larson, a noted collector, took on the job of restoring the Lister. A company in the UK had the original bucks used to make the Lister aluminum body. They pounded the body out of thin aluminum just the way they would have back in the 1950’s. Larson then received the body and finished it in a beautiful black gloss paint.

Famous engine builder Bill Terry had to use a new block, however the original Cunningham twin plug wide angle head was machined back to life. The car now has a 5-speed manual transmission which allows a nice smooth ride.

The light weight steel space chassis shows well in the photos on the ad page. The disc brakes up front are as original and inboard rear discs are used just as Lister had done. Braided stainless steel has been added for the brake lines and oil lines.

It now sports its Heritage Sticker signaling that it has been FIA approved. They tell us it is a good driver class representation, capable of long runs over winding roads were it thrives. 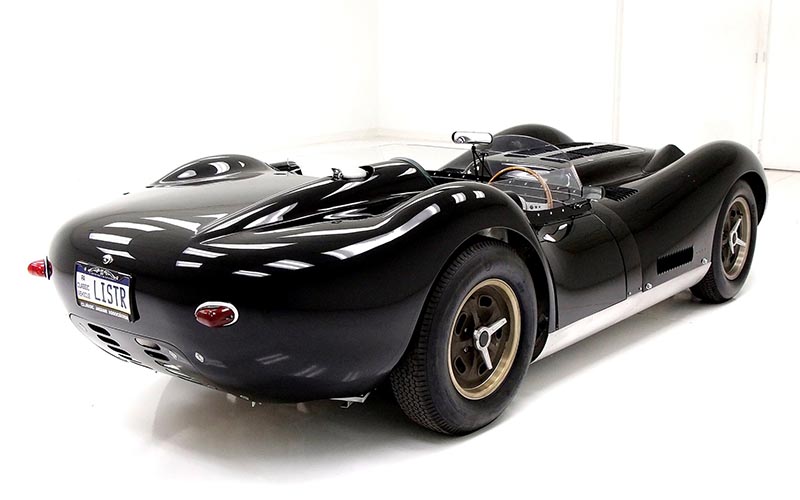