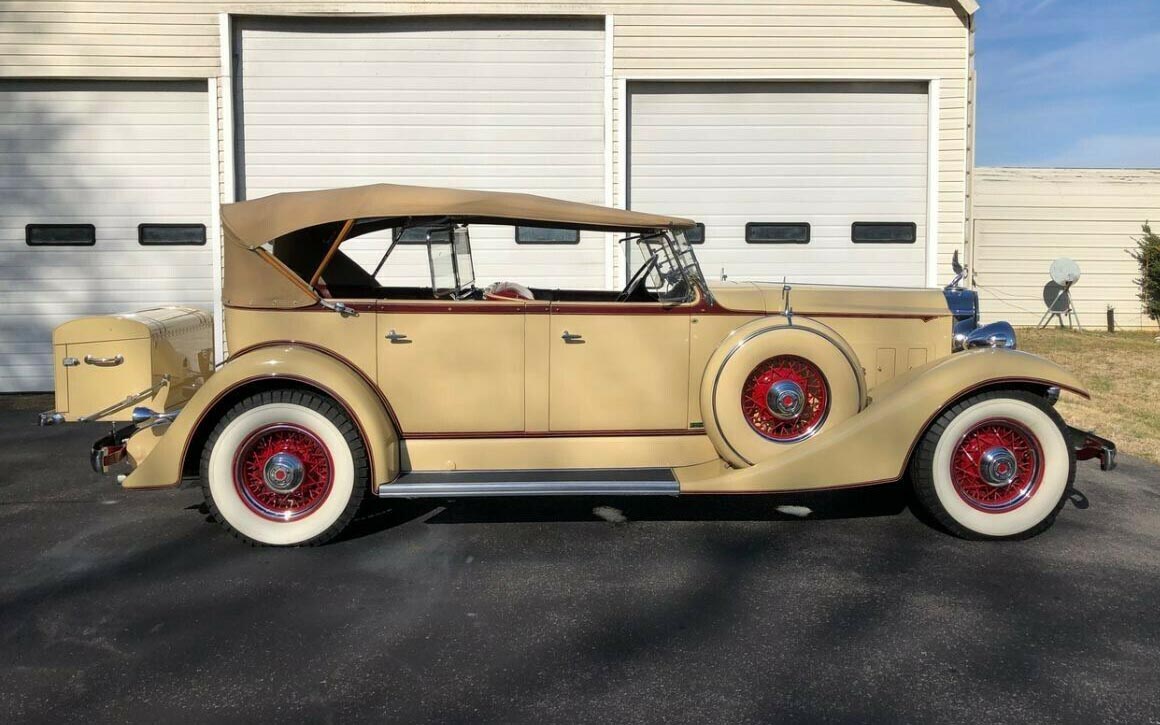 A product of the Great Depression era, the 1933 Packard Dual Cowl Model 1002 Phaeton is by its nature a very rare classic motorcar. It was Packard’s worst sales year since 1916, but not because of the quality of the cars. It was the economy, and Packard’s lonely position among the remaining pre-war auto manufacturers that tested this proud American auto manufacturer. General Motors, Ford and Chrysler had multitudes of models at different price ranges and had well entrenched distribution systems. These were grim times for Packard, although they would rebound strongly for a short time following World War II. Packard was a lonely navigator like many other orphan brands, i.e. Studebaker, Duesenberg, Cord, Hudson and others. That is why they are so valuable in the collector car market today.

A rare 1933 Packard Dual Cowl Model 1002 Phaeton was just posted for sale by a private collector in Illinois (car is in Tennessee.) He says it is in excellent condition and ready to tour. From the photos it looks as though it still has the original 320 ci Straight Eight. (Click here to find more photos of the rare Packard at the link in today’s Cars-On-Line Packard Section.) The Eight Phaeton is considered a 4/5 passenger touring car. It was one of Packard’s 55 model offerings that year. The seller does not disclose much about the originality and does not give any information about restoration work, but it does look really nice in the photos. This is definitely worth inspecting.

An original 1933 Packard Dual Cowl Model 1002 Phaeton would be rare in today’s market, although there are a few around. They would come with a naturally aspirated 5.2 litre engine with nine main bearings, solid valve lifters, a Stromberg dual-downdraft carburetor, rated at 120 horsepower at 3,200 RPM from the factory. It is a rear wheel drive motorcar in a 4-door tourer body style with a 136-inch wheelbase.

If this classic Packard still has its original transmission it would be a 3-speed selective synchromesh manual gearbox. This year model would have had a single plate clutch, although vacuum operated automatic clutch control was an available option.

The original braking system would have used Bendix vacuum assisted mechanical brakes on all four wheels. Original cars would have had a leaf spring suspension and live hypoid differential.

Options on the Model 1002 might have included: dual side-mount tires, sidemount covers, fender lights and trunk rack, spotlight, whitewall tires or a cigar lighter. You can tell from the photos which ones this car has.