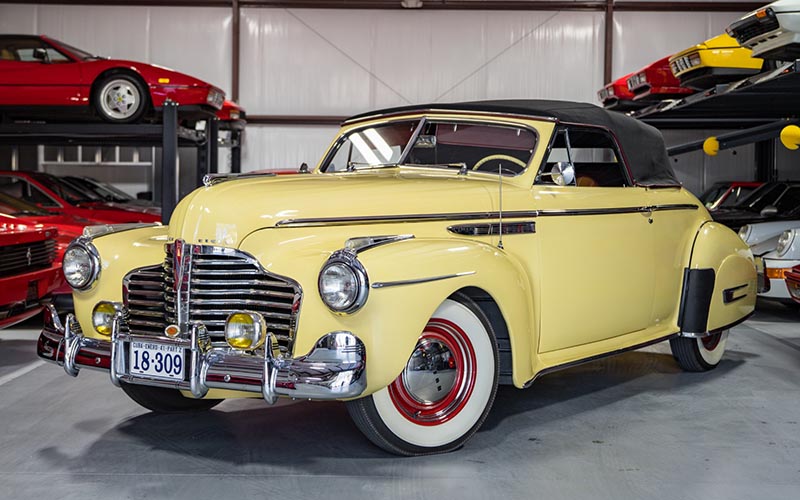 The year 1941 was a ground breaking year for Buick. The new car buying American public was hungry for what Buick was producing. So the 1941 Buick Super 56C Convertible Coupe was in high demand that year, increasing sales by three times the number sold the year before. It was part of a marketing strategy Buick promoted just as convertibles were beginning to capture the attention of the American new car buyer.

The 1941 Buick Super 56C Convertible Coupe was Buick’s most popular convertible that year. You see a stunning example here finished in Sequoia Cream exterior and red leather interior.  The seller has indicated that this Buick Super was “meticulously restored by the acclaimed Doug Seybold of Westlake, Ohio with over 3,000 hours of labor.” Seybold is known for his AACA judged restorations. He specializes in 1940 and 1941 Buicks. Buick collectors will be familiar with the name.

You can see from the odometer that there are 59,474 miles on it at the time of this photo session. It has the electronic clock on the face of the glove compartment and an optional Sonomatic push-button radio. The in-dash heater and dual defroster were also options.

Again in 1941, the Buick transmissions were three-speeds with a sliding gear and a single dry plate clutch, and three-on-a-tree column shift lever. But there were also a number of first-time innovations that year.

Buick introduced twin carburetion using two 2-barrel carburetors in tandem which came standard on the Super 50 Series cars. This is often referred to as a Compound Caburetion system. The valve-in-head Fireball Dynaflash Eight, straight eight-cylinder engine, 248 ci, made 125 bhp thanks to the dual carbs. And that meant this Buick was one of America’s most powerful cars. They came either with Carter or Stromberg carburetors. The front carburetor (full carb with choke) was used in highway cruising, and the extra carb would kick in when under full throttle.

For the 1941 model year, Buick came out with a two-way opening hood that could be lifted open from either side. If you unlatched both sides together you could lift the entire hood off.

All four wheels had hydraulic brakes. A No Roll Hill-Holder feature was optional. Other options included vacuum pump windshield wipers and EZI no glare mirrors.

The president of Buick was Harley Curtice. Some of the strategies that Buick used during the early 1940’s were designed to allow Buick to take over the market. They were competing with Cadillac with their top-o-the-line Limited and Roadmaster. And their Super and Special level models were just a little nicer than Chevrolet cars of that era.

You will always find classic Buicks such as this one in the Buick Section of the Cars-On-Line website. Click this link to see the Classic Buick Section with hundreds of collector Buicks for sale.