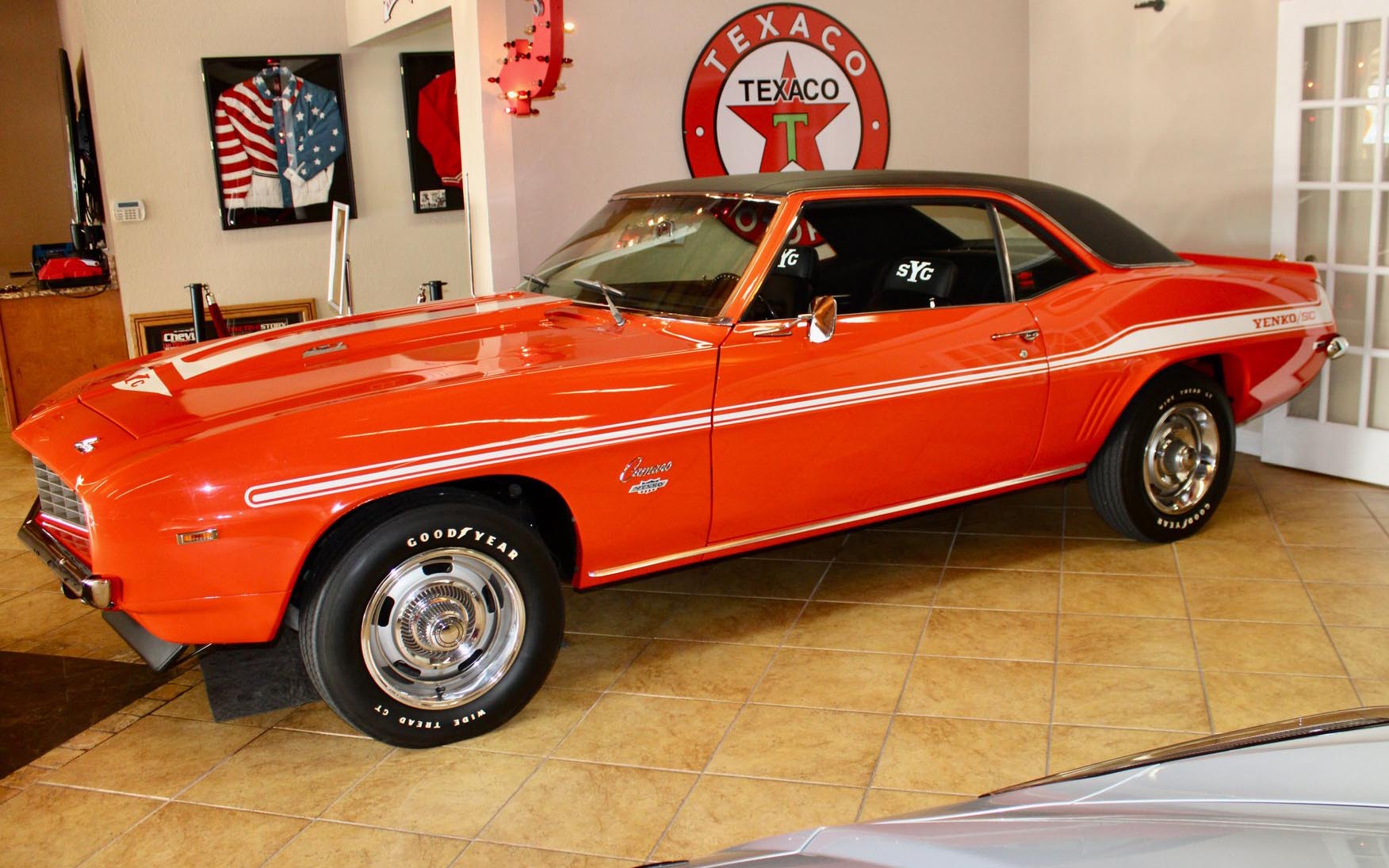 An estate sale liquidation has made this real deal 1969 Yenko Camaro SYC 427 available for sale. Although it was once appraised for near seven figures, it will now be sold to the highest bidder who reads this ad. You probably read about it in Super Chevy, Chevy Enthusiast and Max Chevy magazines in the past ten years. It is one of the most talked about 1969 Yenko Camaro Super Cars ever to come from Don Yenko Chevrolet.

It has been posted here for sale by Classic Cars of Sarasota. They say they have a binder of documents on this car since 1994. When it was last sold through Classic Cars of Sarasota in 2017, many experts believed it was the “test mule” COPO Camaro which Yenko used to develop the 1969 Yenko Camaro SYC 427 super cars. It has benefitted from a documented nut and bolt frame off concours restoration. And it has been treated as a trailer queen ever since.

“Yes, it’s the real deal,” said Classic Cars of Sarasota owner Chris Zlamal. According to the ad, this is one of the first three Camaros produced and the one consigned to Don Yenko Chevrolet in Pennsylvania. (Follow this link to view the ad and see the ad photos.) It is known to be the one used by Don Yenko as his prototype or test car. It is thought that this Camaro was loaned to Yenko Chevrolet so that Yenko could design his trim package on the exclusive Yenko Camaro for 1969.

Yenko would produce 150 of these SYC Camaro Super Cars for 1969. History would elevate the Yenko Camaro for 1969 as one of the most important muscle cars of all time. It is thought to be the first COPO code 9561 Camaro produced. Yenko would later put in an initial order of 100 of these cars.

We’re told hundreds of thousands were spent on the Hugger Orange 1969 Yenko Camaro’s restoration. At the time it was considered by experts to be a “flawless restoration.”

“It is one of the rarest Camaros out there,” says Zlamal. It is suggested that this COPO Camaro was first loaned to Don Yenko at Yenko Chevrolet in Cannonsburg, Pennsylvania by GM to be his “mule” to work out trim and badging for the SYC super car. Yenko had been tipped off by Vince Piggins at Chevrolet to submit a special fleet order COPO invoice so he could order 100 L72 427/425 horsepower Camaros under COPO code 9561. That’s the long story. The short take is that Yenko wanted Chevrolet to produce a factory built 427 ci V8 powered Camaro for him so he could sell more race prepped Yenko Camaros that year.

GM’s L72, COPO code 9561 package included a factory 427/425 horsepower high performance engine, the ZL2 air induction hood, a V01 heavy duty radiator and heavy duty 12-bolt rearend with 4.10 gears. Most came with the M-21 or M-22 Muncie 4-speed, although some came with TH400 automotic transmissions with overdrive. The first 100 of these cars produced by Chevrolet were sent to Yenko Chevrolet. After that many COPO Camaros were also ordered by Fred Gibb Chevrolet, Berger Chevrolet, Dana Chevrolet and Baldwin Chevrolet. In all, 1,015 COPO Camaros are thought to have been produced.

Classic Cars of Sarasota tells us that hundreds of thousands of dollars were invested to restore this car. It comes with a binder of documents including letters from the former owner’s son, a letter from GM, appraisals by Camaro experts and magazine articles featuring this car. It goes without saying that some of the top Camaro collectors in the world are going to be interested in this incredible find.

As the story goes, veteran drag racer Dickie Harrell showed Trans Am racer Don Yenko how to fit a 427 big block into a Camaro using a Corvette stinger hood … and the rest is history. That was in 1967. The Yenko Camaro came of age in 1969 when Yenko Chevrolet began ordering factory built COPO Camaro 427 ci high performance big block cars and adding a special Yenko paint job and interior. Today these rare Yenko Camaros have appreciated 7,600 percent in value from the original dealer price. (A base priced Yenko Camaro in 1969 cost $4,245, about $500 more than the factory price of a COPO.) Because of the COPO fleet ordering process where the factory installed the 427 ci big block motor and high performance extras, Yenko was able to sell 150 of them that year.

These cars came with a COPO L72 427/425 hp engine and mandatory disc brakes. This one is a 4-speed. Although Chevrolet rated this iron block, solid lifter big block at 425 horsepower, Yenko said himself that he figured they were at least 450 horsepower. You can just barely see the Hurst shifter in the photo (click link above.) They say these cars could do 13-second quarter miles right off the showroom floor.