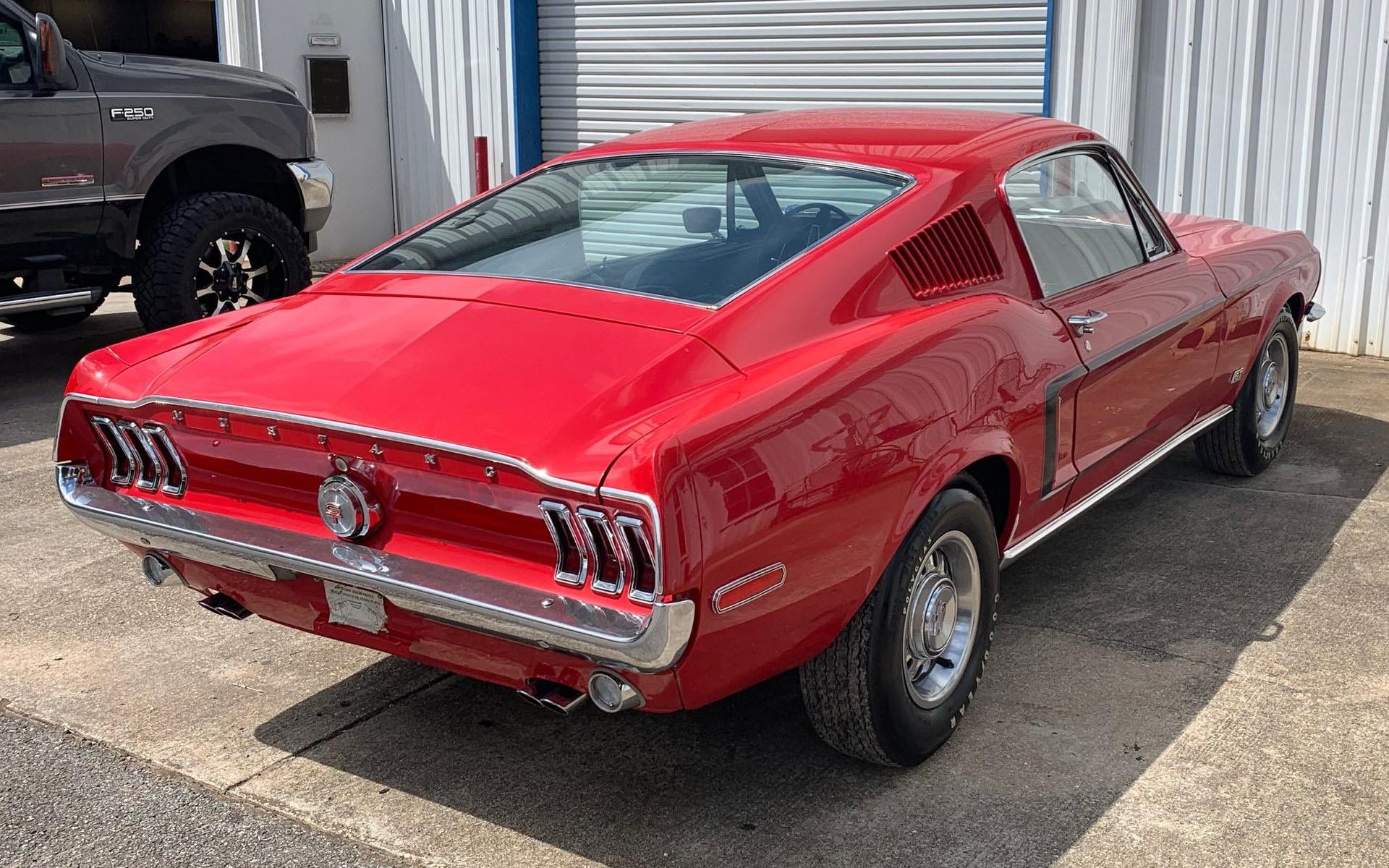 Here is one blue chip investment grade Mustang GT which is even more rare than a Shelby Mustang. It may be a once-in-a-lifetime opportunity for some lucky collector who knows what he is looking at. It comes with pedigree and a great story. After all it went from a Georgia barn find to an AACA Senior National and AACA Grand National award winner.

A 1968 1/2 Mustang GT R Code with a special factory built 428 CJ and Ram Air was listed for sale this week in the Mustang Section on the Cars-On-Line website. According to the Marti Report, it is 1 of 1,236 1968 Mustang R Codes produced, and one of 1044 Fastbacks made w/ the 428 Cobra Jet engine. That alone would make it rare in collector car circles. But the 1968 1/2 Mustang GT R Code cars came with a specially designed big block 428 engine with extra performance enhancers that even Shelby Mustangs did not have.

Rated at 335 horsepower, it has the 4.30 Traction Lok rear axle ratio which would scream down the road with excellent acceleration and tire shredding torque. They were a terror on the race track. In fact, that is why they were produced by Ford. Straight line performance at the drag strip was what Mustang had been lacking in its early years. One owner stated, “This is one of the best driving and most powerful Mustangs I’ve ever had.”

The Marti Report can be read in the ad photos on the Cars-On-Line website. (Click here to review the photos and ad description.) It is being offered for sale by a private party seller in Minnesota. The owner says that the title history documents it as having 23,500 original miles. That seems to be right from the photos where the odometer tumblers are dead straight across.

The owner says this car has undergone a full nut and bolt restoration to the extent it is 100% correct. The bottom side of this car is just as clean and perfect as the top and under the hood. All the factory markings have been crucially redone on each and every part just like from the factory.

Here is an interesting video produced by Dennis Collins, the collector who discovered this car which had been in storage since 1994. Watch as he verifies the numbers, and finds out this car came from Bob Tasca Ford.

Back in 1985, Autoweek said, “the ’68 1/2 Cobra Jet still remains perhaps the fastest running pure stock ever for straight-line quarter-mile drag racing.” But the story of how this big block Mustang came into being is interesting.

By the late 1960’s Tasca Ford in Providence, Rhode Island, was a famous center of Ford performance on the east coast. Even though they sold a lot of Mustangs, their customers began to grumble about their lack of competitiveness at the track. So Tasca Ford put a 428 Police Interceptor with 427 cylinder heads and a special cam in a Mustang coupe and gave it to Hot Rod Magazine to test. The results were so good that Ford Motor Company produced the 1968 1/2 Mustang GT the very next year with a special 428 Cobra Jet engine.

The heart of the Mustang GT R Code was a standard production 428 big block. As vanilla as that was, Ford spiced it up with some parts from the Ford parts bin. The 428 was upgraded with 427 heads, a 390 GT cam and a cast-iron replica of Ford’s Police Interceptor intake. It was fed through a 735 cfm Holley carburetor sucking air through Ford’s first Ram Air induction system.

You will hear that the “lightweight” 1968 Mustang GT 428CJ’s were very successful in drag racing that year. Holman and Moody prepped six R Code Mustangs to race at the 1968 NHRA Winternationals in Los Angeles. Four of the Mustangs made it into the finals. That is saying something. To take advantage of the good publicity from their NHRA success Ford produced the street version of the 1968 1/2 Mustang GT with the 428 Cobra Jet as described above.