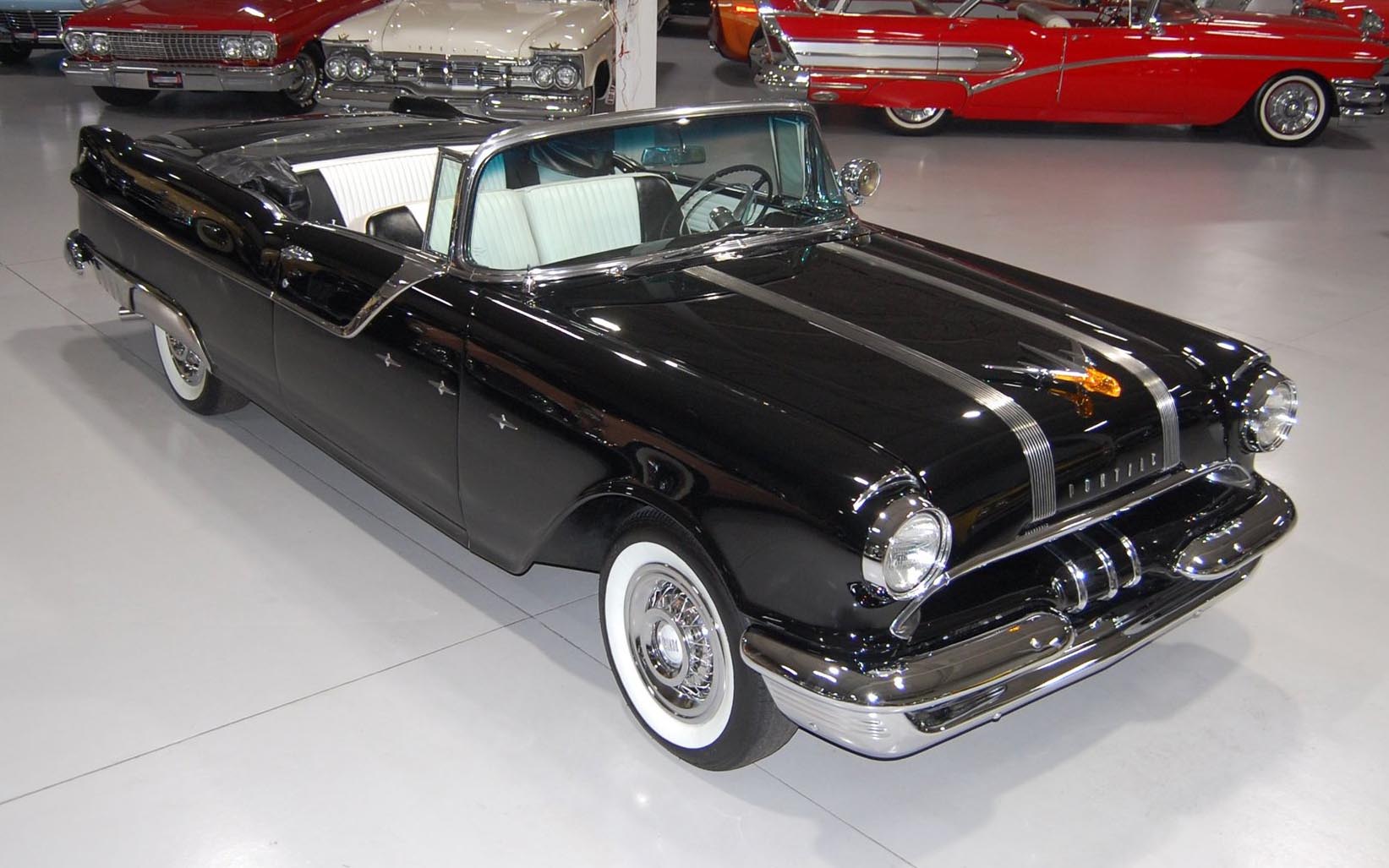 It would be hard to illustrate just how much cars such as the 1955 Pontiac Star Chief Convertible changed lifestyles in America. It was the A-body GM cars, the Chevrolet Bel Air, the Pontiac Star Chief and the Oldsmobile Starfire, that marked a new era in this country. They were benchmark designs that told of a new progressive era in America. It was the beginning of a car culture craze that captured the spirit of the young baby boom generation.

This week a 1955 Pontiac Star Chief Convertible cruised in to Ellingson Motorcars at their shop in Rogers, Minnesota. It is a black car with a black convertible top and black and white tutone interior. What could be better than that? It is a combination you won’t find anywhere else. (Follow this link to review dozens of detailed photos.)

Much like the Chevrolet Bel Air for 1955, the 1955 Pontiacs were all new. The Star Chief was part of the redesign that year and became Pontiac’s prestigious flagship model. For that era, the Star Chief was the epitome of modern technology.

This 1955 Pontiac Star Chief Convertible is a beautifully restored, 50s cruiser.  Introduced to the public in mid-October 1954, the new Star Chiefs featured a brand new design. It also revealed the new overhead valve V8 engine. The overhead valve design was a first for Pontiac. Pontiacs were mostly six cylinder cars up till then.

The new-look 1955 Pontiac Star Chief Convertible was 11 inches longer than its predecessor and was built on a wheelbase two inches longer than the 1954 models. Special to the Star Chief were the three new star emblems on the front fenders and doors. Of course, probably the single most memorable part that came on the 1955 Star Chief was the Indian head mascot hood ornament which would light up when the lights were turned on after dark. Many of us old timers remember how it provided a unique orange glow as your car approached. It also had the unique headlight trim which looked like an airplane style air intake. That aircraft styling continued along the aluminum side sweep trim which ran along the the doors to the rear fenders. The elegant anodized aluminum rear fender trim was a stunning extra that you would only see on the Star Chief. What really made the Pontiac Star Chief stand out from other GM cars were the modest fins atop the rear fenders and the simple tail light design.

This particular Star Chief Convertible came to Ellingson’s from a collector who owned and maintained the car for nearly 20 years. Powering this ’55 Star Chief is an upgraded 347 ci V8 engine paired with a single 2-barrel carburetor. The NOM 347 V8 is hooked up to a Hydra-Matic automatic transmission ensuring that anybody can take this Pontiac convertible for a spin around the block. They called the automatic transmission the Strato Flight Hydra Matic. Dual exhaust gives this ‘55 Pontiac a nice throaty sound. The chrome tips provide a beautiful visual effect.

The exterior has been beautifully refinished in Raven Black paint which gives the car a truly elegant look. They say the black cloth power convertible top is in fantastic condition and it goes up and down with the simple push of a button. Riding on wide whitewall radial tires with Pontiac branded wire basket wheel covers, this ’55 Pontiac has a great look and even better ride. It is nicely accessorized with the addition of a driver’s side spotlight and rear fender skirts.

Ellingson’s tells us that the interior on this classic Pontiac is “superb.” The front and rear bench seats have been correctly reupholstered in Black and Ivory vinyl. The dash, door panels and steering wheel all appear to be in their stock configuration as well. The black painted dash is equipped with a 120 mph speedometer, battery gauge, water temperature gauge, oil pressure gauge, and fuel gauge, along with a push-button AM radio and clock.

History tells us the 1955 Pontiacs were really popular. Sales almost doubled compared to 1954 sales figures. These convertible versions are hard to find. But this one is priced conservatively because of the non-original motor. The bigger V8 might be considered a plus.