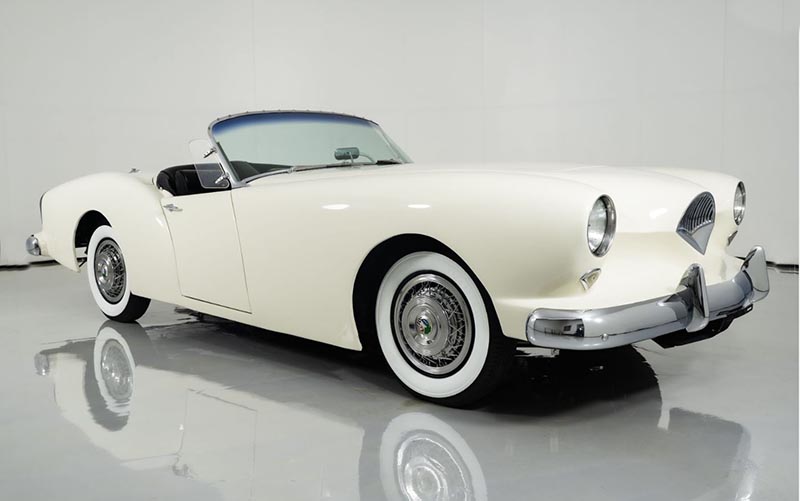 It is a fact that a prototype of the Kaiser Darrin was introduced in September of 1952 at the Los Angeles Motorama. That was a full two months before GM introduced the 1953 Corvette. The Kaiser Darrin was well received again at the New York Auto Show in 1953, so Kaiser Motors announced that it would be available by that  fall, which would have beaten Chevrolet’s Corvette to market. However, the Darrin was stalled in production until January of 1954. Yes, the Corvette actually beat it into production by a hair. But the controversy over who was first is still argued today.

A nicely restored 1954 Kaiser Darrin 161 Roadster is being offered for sale this week at Fast Lane Classic Cars in St Charles, Missouri. This fresh roadster is #302 of 435 production cars, with Serial Number: 161-001302. One of the 161 ci 6 cylinder versions, they say it was mechanically restored with a rebuilt engine in 2022. Kaiser used the 2.6L 161 ci F-head 6-cylinder Hurricane engine which they also used in the Willys Aero Eagle and Aero Ace at the time. In addition to the engine, it has rebuilt brakes, and was restored with the body off the frame. Yet they say it retains most of its original paint. It is white with a black interior, new Firestone whitewall tires and wire wheel covers. They also came with a tachometer in the dash.

Here is a walk-around tour provided by Fast Lane Classic Cars. You can hear it start up and run.

The Kaiser Darrin convertibles were no cookie cutter version of British two-seaters. No, the Kaiser Darrin will be  remembered as an innovative design all its own. Noted Packard designer Howard “Dutch” Darrin penned the renderings which would include ingenious sliding doors (called “pocket doors”) which disappeared into the front fenders. No other car before or since has had such a design. Then Darrin gave the roadster a three-position convertible top and a heart shaped chrome grille in the front valance. The whole body was made of Kaiser fiberglass, with hood, doors, and trunk lid provided by Glaspar Boat Company. The body was fitted to a modified Kaiser Henry J chassis. The low rear fenders seemed to taper to the taillights, with lines pleasing to the eye.

Kaiser paid the price for all that innovation. The Kaiser Darrins were so expensive, they sold for $3,668, more expensive than a full sized Cadillac that year. They were delayed in production because of financial problems at the Kaiser Motors Company. The company was forced to discontinue production on the Darrin roadster.  It was a one-year wonder.

All of the troubles at Kaiser Motors probably kept the production numbers down also. So, for collectors, these cars are rare and valuable. Because they were made of fiberglass, about 300 are thought to have survived today. 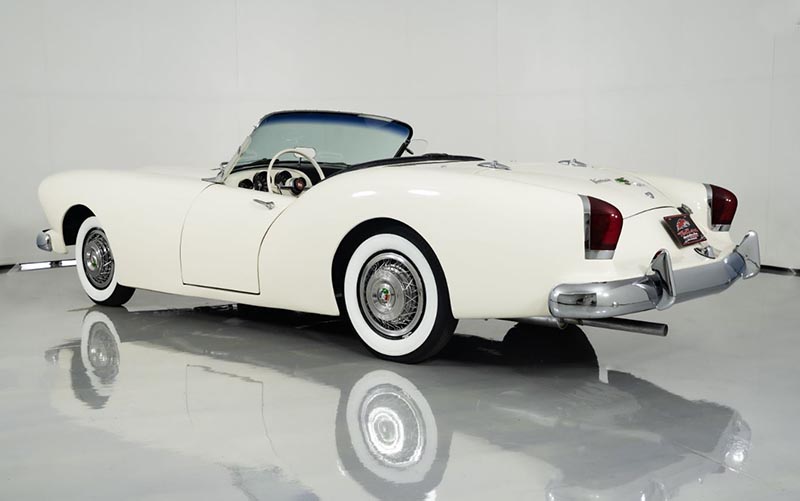 You will find more 1954 Kaiser Darrin 161 Roadsters in the Sports Car Section of the Cars-On-Line website.

One Response to 1954 Kaiser Darrin 161 Roadster