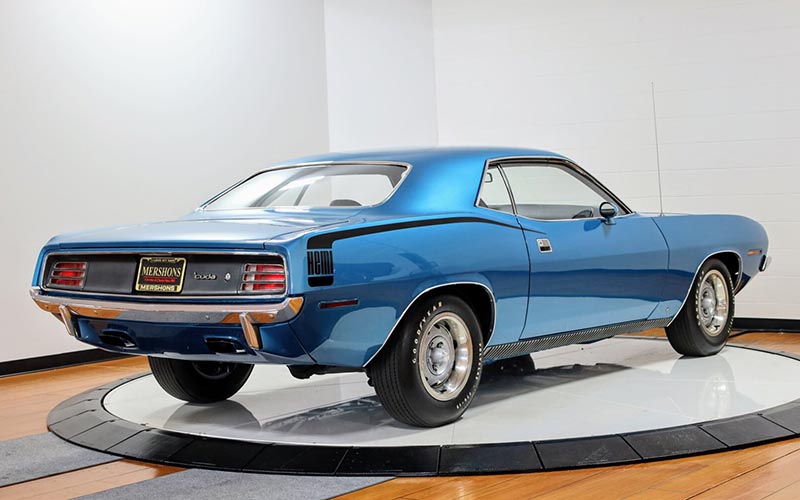 If you were to draw up a list of the Top Ten Muscle Cars of All Time, the 1970 Plymouth Hemi Cuda would be on that list. It was in 1970 that Chrysler redesigned the Barracuda to create its third generation built on an E-Body platform. But the coups de gras was when they gave it the King Kong monster 426 Hemi 7.0 liter motor. The Hemi powered Cuda was a little smaller than its cousin the Dodge Challenger, and it would be the preferred choice of drag racers for years. With a massive 425 horses, they would dominate the competition.

Real deal Hemi Cudas are tough to find in today’s collector car market. Collectors expect them to keep going up in value so very few make it to the public markets. But Mershons in Springfield, Ohio has posted one for sale in the Cars-On-Line Mopar Section. Seen here in Color code B7 Jamaica Blue Metallic paint, it is complemented with black Hemi stripes and a black vinyl interior. Most important, it has the Shaker hood. A copy of the broadcast sheet can be seen in the ad photos. (Click here to review the ad and photos.)

Under the hood you will find the earth shaking 426 Hemi topped with dual four-barrels and mated to an A727 Torqueflite automatic transmission. It comes with dual exhaust with chrome tips, hood pins, 4.10:1 rear axle, front disc brakes, power steering and woodgrain accents along the dash and console. Note the Rallye instrument cluster, dealer visor sleeve and Rally wheels.
Mershons says no expense was spared during the restoration. And they say it is “meticulously detailed.”

A History of the Plymouth Hemi Cuda

When 1970 rolled around the muscle car market was at its crescendo. Monster big block motors were being developed by all the major car makers. But Chrysler out did all the rest when it unveiled  the 1970 Plymouth Hemi Cuda. It just changed everything as it turned up the volume at the drag strip that year. The 1970 E-body Cuda was totally different from its forebearer, the A-body Barracuda, a variant of the Valiant. No longer was the Cuda based on an economy car model. The E-body Cuda was a swashbuckling muscle car, shorter but with a larger engine compartment that would accomodate the 7.0L 426 Hemi monster motor. The look and stance of the 1970 Plymouth Hemi Cuda remains an iconic symbol of the entire muscle car era.

Chrysler had picked up on the common nickname for the Barracuda. So in 1970 it honored the ‘Cuda name as the muscle car version of the Barracuda.

The Hemi cars were set up from the factory with upgraded suspension components and structural reinforcements to get all that power to the pavement. There were only 652 Plymouth Hemi Cudas built in 1970, the first year for the E-body. Fourteen of that number were convertibles. The 426 Hemi engine was an R code with dual quad carburetors rated at 425 horsepower.