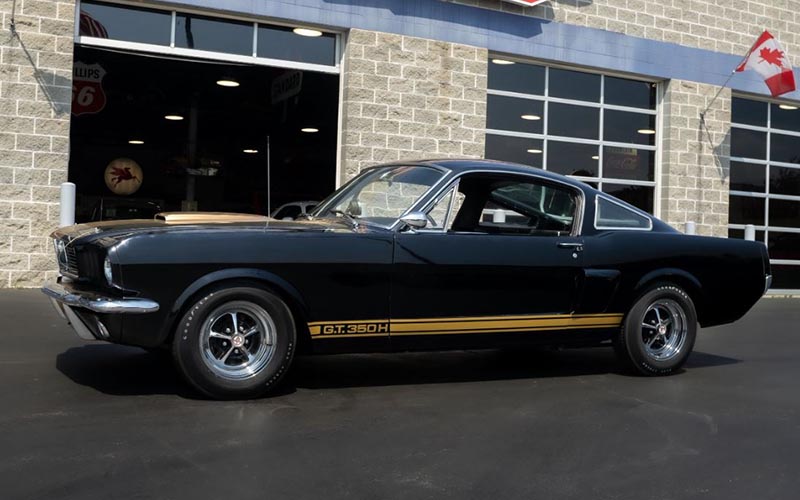 In 1966, trying to get 306 horsepower out of a 289 small block motor was no easy task. In fact, it was unheard of up to that time. Yet, that is what Carroll Shelby did when he produced the early first generation Shelby Mustangs. No, Shelby wasn’t just a master at getting horsepower out of his designs. He was also a master salesman. His pitch to Hertz Rental Car Company to buy 1,000 Shelby Mustangs and offer them through their Hertz Sports Car Club members was a stroke of genius. Known today as the Rent-A-Racer program, Hertz bought special edition Shelby GT350H (the H stood for Hertz) cars to offer as new car rentals in 1966. The program is one of the most amazing marketing plans ever invented by an American car company.

For $17 a day any Hertz member could drive off the Hertz lot in a 306 hp performance Pony car. These 1966 Shelby GT350H Mustangs would become icons in the collector car market. When the cars were taken out of service as rental vehicles, they sold them back to Shelby who re-sold them again. Even back then sports car enthusiasts knew they were special cars.

This week a real deal 1966 Shelby GT350H Rent-A-Racer is being offered for sale in Cars-On-Line’s Shelby Section online. It is being advertised by Fast Lane Classic Cars in St. Charles, Missouri. Fast Lane Classic Cars tells us this is a real Rent-A-Racer Hertz that has been  owned by the same collector since 1988. Take a look at the dozens of detailed photos in the ad. (Click here to find the ad on the Fast Lane Classic Cars website.) Raven Black with Gold Lemans stripes, they believe the miles showing on the odometer to be original. You will see in the photos that the odometer reads just 56,615 miles. They say it has had one repaint, and retains a very original body. You can also see the 14″ Shelby Magnum 500 wheels in the photos. You will notice that the interior has the Shelby dash-mounted tach, racing lap belts and the fold down rear seat.

Fast Lane Classic Cars says the engine is the numbers matching HiPo 289 ci V8 that came with this Shelby GT350H Rent-A-Racer. It also has a correct C4 automatic 3-speed “Select Shift” transmission, Ford 9″ rear end, with 3.50:1 final drive ratio. You can check all the numbers in the ad photos.

When Ford Motor Company came out with the Mustang in late 1964 it became an instant success. This new Pony car’s popularity had been predicted by Ford to the point where they actually recruited Carroll Shelby to create a Shelby Mustang racing program to compete in SCCA Trans Am racing. Shelby did for the Mustang what he had successfully done for his Shelby Cobra in SCCA Production A and FIA events.

The Hertz Rent-A-Racer program produced 1,001 1966 Shelby GT350H fastbacks, all with the Cobra 289 ci HiPo V8 factory rated at 306 horsepower. Hertz Corporation admitted that it did a great job of promoting Hertz car rentals. But the program proved very expensive just to keep the cars in the rental fleet. There were lots of anecdotes about racing enthusiasts renting the Hertz 1966 Shelby GT350H rental cars and taking them straight to the race track. They say the Hertz cars were offered mostly in warm weather locations. Not all Hertz locations had them.

Of the 1,001 Hertz 1966 Shelby GT350H Rent-A-Racers built the majority of them were finished in unique Raven black paint with gold Lemans racing stripes. But there were also 50 Candy Apple red GT350H cars, 50 in Wimbeldon white, 50 Sapphire blue and 50 Ivy Green. Two of the GT350H models were prototypes. All were built in the Shelby American plant in Los Angeles.

The first 100 Hertz Shelbys all came equipped with a 4-speed. But Hertz found out that they were burning through clutches. So the remainder of the cars produced all had automatic transmissions per Hertz request. All of the 4-speeds were Raven black.

The Hertz 1966 Shelby GT350H, based on the Shelby GT350, featured a Cobra 289 High Performance V8 engine producing 306 hp and 329 lb-ft of torque. Although most of the cars did not feature power brakes, a power brake booster was added to some of the vehicles per Hertz’s request. It seems many of their clients found the braking to be too difficult and complained to the company.

A unique feature of the Shelby GT350H are the center caps for the 5-spoke Shelby wheels. The Hertz Sports Car Cub logo was used for the center cap. Other special features include functional fiberglass fender scoops used to cool the rear brakes; a red, white, and blue Cobra gas cap featuring the Shelby emblem; a tachometer mounted on the dash; and Plexiglas rear quarter windows. Of note, about 100 of the 1966 Shelby GT350Hs did not feature the fiberglass hood found on regular GT350s. They came with an all-steel hood.

They say the 1966 Shelby GT350 would do 0-60 in 6.6 seconds per tests by Car and Driver magazine. The standing quarter-mile required 15.2 seconds at 93 mph. They recorded the top speed at 117 mph. These Pony cars were extremely quick, so you can imagine the impact they would have at a race track.