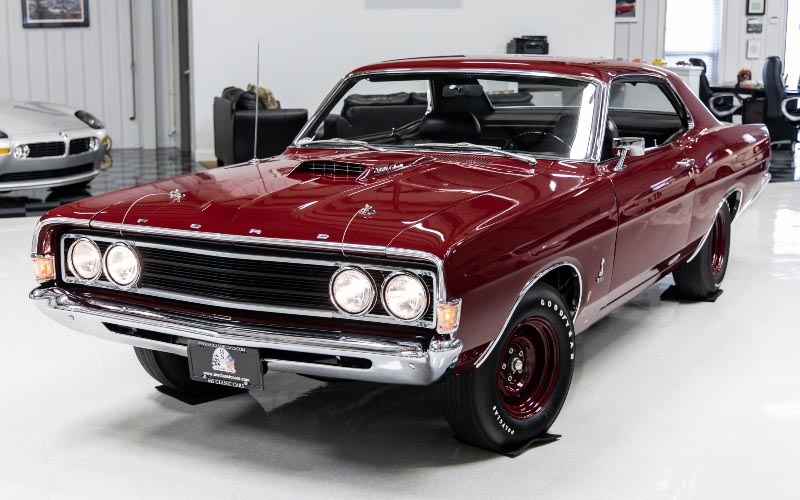 By 1969, Ford Motor Company had the rights to use Carroll Shelby’s Cobra brand pretty liberally. That was the year they came out with a one-year only model called the 1969 Ford Cobra. It was a Fairlane based two-door version, which came with the 428 CJ big block Ford motor and Ram Air. Some were hardtops and some came with the Sports Roof. As you might expect, they were designed to go racing. From bumper to bumper, Ford designed and built this car to perform at the track with heavy duty competition components.

You don’t see these 1969 Ford Cobra 2-Door Hardtops very often, but this week MS Classic Cars in Seekonk, Massachusetts posted an excellent example. Restored to a “T”, it is probably the best one left on the planet. Ford built 11,099 Cobras with the Sports Roof, but only 3,786 with the formal roof hardtop. That is why it is so rare to see one. (Click this link to review over a hundred detailed photos, and read the Deluxe Marti Report.)

This very rare 1969 Ford Cobra 428 is the real deal and has been completely restored to high show quality standards. It retains its original color combination and is powered by its original matching numbers 428 CJ Ram Air V8 engine, C-6 Cruise-O-Matic transmission and 9” Ford rear with 3.50 gears. It’s fully documented with the original build sheet and Marti Auto Works “Deluxe Report” which are included with the sale.

Sporting a Royal Maroon  exterior and black broadcloth and vinyl bench seat interior, this Cobra was ordered with the following options: Deluxe Wheel Covers, F70x14 Traction Tires w/ raised letters, AM Radio, power steering and C-6 Cruise-O-Matic transmission. According to the Deluxe Marti Report, this vehicle is one of 159 with this paint code, one of 67 with this paint and trim code, one of 1,324 with this engine and transmission code, one of 167 ordered from this DSO and one of 168 with deluxe wheel covers. Of course, today few of these cars still exist.

Click the video window below to view a video presentation by MS Classic Cars on this 1969 Ford Cobra.

The 1969 Ford Cobra is often mistaken for a Torino Cobra, but Ford did not come out with a Torino Cobra until 1970. It is true that you could order a 1969 Ford Torino GT with the 428CJ engine that year, but they were never referred to as a Torino Cobra. (What contributes to the confusion is that NASCAR referred to them as Torino Cobras during the 1969 racing season.)

On paper, the Fairlane based Ford Cobra was unbeatable off the line. After all, it had the R Code 428 Cobra Jet engine with a 735-cfm Holley carburetor being fed by Ram Air induction which was designed to grab the compressed air coming off the hood’s front edge and ramming it down into the center bowls of the carburetor. That created 440 lb-ft of torque at 3,400 rpm. Mopars and Chevrolets did not want to see these cars show up at the track.

This Cobra is powered by the original matching numbers 428-4V Cobra Jet Ram Air V8 that was factory rated at 335 hp. The engine was completely rebuilt by Morris Automotive Machine located in Manchester, Maryland. MS Classic Cars says the engine runs and sounds awesome! The 428 CJ was available with or without the Ram Air Induction package. This one has it.

When you check out the detailed photos on their ad page, you will be amazed how clean and beautiful the undercarriage is on this car. I mean spotless! The restoration on this car puts it over the top!