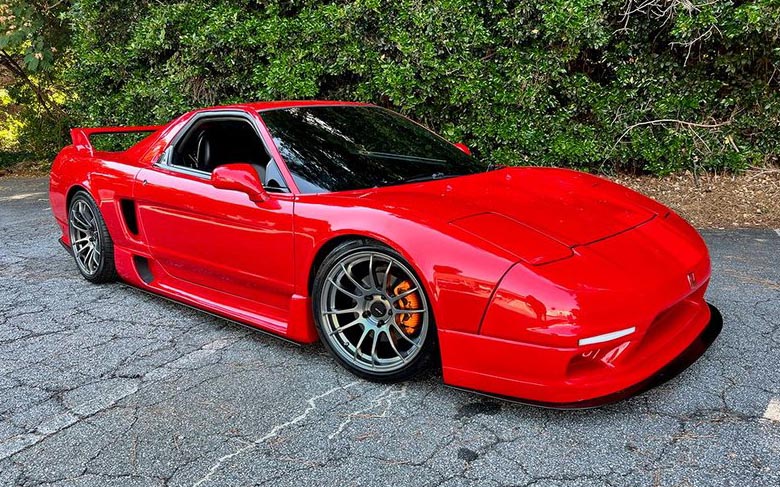 In the collector car hobby we try to predict what cars are going to be popular in the near future.  If you invest in them before they get “hot” your investment can appreciate in value as they reach their potential. Classic car collectors today may not see a 1991 Honda NSX super car as being a hot collector car now, but it is high on the list of “future collectibles.” In fact, not many American collectors are aware that Honda offered the NSX under the Honda brand for the Japanese new car market from 1990 through 1995. That gives these cars some attractive potential.

This week we were watching the new listings for the upcoming GAA Classic Auction in Greensboro, North Carolina. When they added a 1991 Honda NSX exotic super car to their auction inventory at first we thought it was a typo. Then we got schooled on what a Japanese Domestic Market car is as opposed to cars that were built for the U.S. and Canada. Basically it means they are high performance cars that have the steering wheel on the right hand side. JDM’s were not sold in the U.S. but a few have shown up here over the years. This is a rare 1991 Honda NSX as originally made for Japanese domestic sale. (According to the NHTSA Importation and Certification FAQ, a motor vehicle that is at least 25 years old can be lawfully imported into the U.S. without regard to whether it complies with all applicable FMVSS regulations.) So you may see a few 1990’s performance cars showing up here in the U.S.

Perfect for the collector car market, this 1991 Honda NSX is a rare find. (In the U.S. and Canada all NSX’s were sold under the Acura brand.) It will be on the auction docket on Friday, July 22, 2022 at the GAA Classic Auction in Greensboro. A smart collector might be able to bid on this one and pick up an exotic car that will escalate in value. According to Hagerty Insurance, the first generation Acura NSX cars have risen over 50 percent in value just in the past year. You can imagine what a rare Honda version might be worth.

As a first generation NSX (1990-1995) the Honda version is right hand drive from Japan and came with the 3.0L DOHC FI 24-valve V6 engine with Variable Valve Timing and Electronic Control (VTEC.)  Seen here in R-77 Formula Red finish, it has the black leather interior and a 5-speed manual transmission. (Click here to review dozens of detailed photos on the auction ad page.) As was the original design these NSX’s came with a lot of creature comforts baked in. This one has the automatic Climate Control, power and vented 4-wheel disc brakes with anti-lock, power door locks, power windows, power seats, power mirrors, tilt telescopic steering column, traction control and driver’s side airbag.

But, most important, it has the definitive signature of the NSX, the perfect power to weight ratio and unmatchable balance.

You see, way back in 1991 the NSX became the first all-aluminum bodied super car to be mass produced. Honda designed the NSX as an all-aluminum, monocoque body with an all-aluminum suspension. Because of the mid-engine configuration, they say the balance was so stable that it could be pushed to the limit, much like a Formula 1 race car. Combine that with the all-aluminum 3.0L V6 engine with dual overhead cams and you had a power to weight ratio that was unheard of up to that time.  One observer noted that this engine was happy to rev at 8 grand all day.

The NSX was designed by a team led by Masahito Nakano, chief designer, and Shigeru Uehara, executive chief engineer. They say the aerodynamics and styling were inspired by the F-16 jet fighter. This was the first car Honda would design with a mid-engine format as they ventured into the sports car world. They based their design as closely as possible on a Formula 1 race car.

When Honda’s new sports car, called the NSX, was first debuted at the 81st Chicago Auto Show held in February 1989, the convention hall was abuzz with people talking about the new red sports car on display. The media was enthralled with the prototype.

Honda felt the developement of the NSX was so important that they built a special plant, the Saitama factory’s Tochigi Plant completed in May of 1990. It was dedicated to the production of the all new aluminum bodied sportscar they called the NSX. The assembly line process was modified for the all-aluminum bodies so that they were, for all practical purposes, hand assembled.

The NSX was on sale in Japan from 1990 to 2005. (North American models were sold under the Acura brand. The Honda NSX was not available in the U.S.)

With the emergence of the second generation (or retro) NSX, which came out in 2016, the original NA1 3.0 NSX versions have become more valuable and are now considered to be one of the hottest “future collectibles” in the collector car hobby.

Hagerty reported that out of a couple hundred cars sold, the average value on a show quality NSX was $105,000, while an average driver quality car might be worth $64,900. Prices on these cars jumped by 50 percent since January of 2021. So the collectibility of the NSX is a fairly recent development.

The R-77 Formula Red edition which you see pictured here will be offered for sale at the GAA Classic Auction in Greensboro, North Carolina in two weeks. What makes this so newsworthy is that this car will be offered at No Reserve. This is an opportunity to acquire this rare exotic sports car by placing the highest bid offered for it that day. The 1991 Honda NSX will cross the auction floor at the GAA Classic Auction on Friday, July 22. How many of the bidders there will know the value of a JDM when they see it? Maybe our readers will have a little bit of an advantage when this car crosses the auction floor.

You will find hundreds of exotic super cars much like this one in the Cars-On-Line.com Exotic Car Section online. New listings are added everyday. Make sure to bookmark the page.