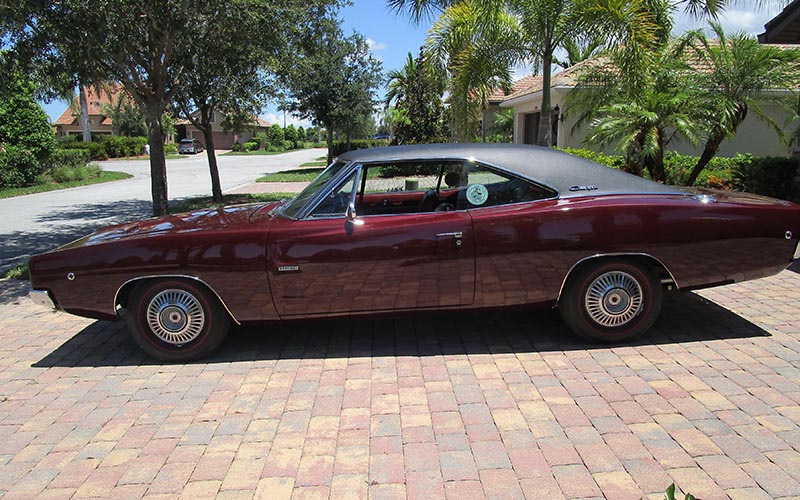 A new chapter in muscle car history was writing itself in 1968. Dodge not only redesigned their popular Charger model, but then they combined it with a revised 426 ci dual quad street Hemi that same year. For years drag racing fans knew about the wonders of the elephantine Hemi motor. Now the new car buying public was getting a clue as to what the 1968 Dodge Hemi Charger R/T was all about.

For 1968, Dodge came up with a stunning design on their popular Charger. Not only did they change the body with the new hidden headlamp front valance, but they invented the “coke” bottle look with the curvy body and defined tail. Then they created the R/T (Road and Track) version for the ultimate appearance and performance package. These were exciting times for Mopar fans. But the cherry on top was the R/T package with the revised 426 Hemi for 1968. It just doesn’t get any better than that.

For the R/T package you could get the 440 Magnum big block motor, or you could get the premium choice, the 426 Hemi for $605 extra. The ’68 version of the street Hemi came with a slightly longer duration cam, new valve springs and reduced oil consumption.

A private party collector from Florida just listed his 1968 Dodge Hemi Charger R/T for sale this week on Cars-On-Line.com. The car is said to be in “amazing condition.” The Burgundy Metallic paint is stripe delete. That was an option in ’68, but few have survived that way today. He rates the paint as a “10.” He says the car is “clean enough to eat off of, top or bottom.”

The Florida collector says the drivetrain on his ’68 Hemi Charger R/T is original. And, yes, that is a real J Code 426 ci Hemi motor which the factory “under” rated at 425 horsepower. Since it is mated to a factory heavy-duty TorqueFlite automatic transmission, it was perfect for straight-line acceleration, and Dodge gave it a special high-stall-speed torque converter. The three-speed automatic came on 264 of the Hemi cars that year. Although this ’68 Hemi could be driven on the street at lower idle like a small block, it was more than a half second quicker than the big block 440 motor and cut 10 mph off its quarter mile time.

Aside from the incredible 426 Hemi motor, this car stands out because the seller says it has rare Code 581 Special 15″ hupcaps which he says came with the car from the factory. (See the photos and the ad description online here.) Now you can search high and low and never find a set of these.

The 1968 version of the Charger is referred to as the “second generation” of the Charger. As a new car model it sold six times more units than the previous year. Of the 92,590 Chargers produced that year, 17,665 were R/T’s. Improvements happened every year from 1968 through 1971. Today the Dodge Charger is a favorite among Mopar collectors. But the 1968 was the year that started it all.

You will find hundreds more interesting Dodge, Chrysler and Plymouth muscle cars on the Cars-On-Line website. See them in the Mopar Muscle Car Section now.