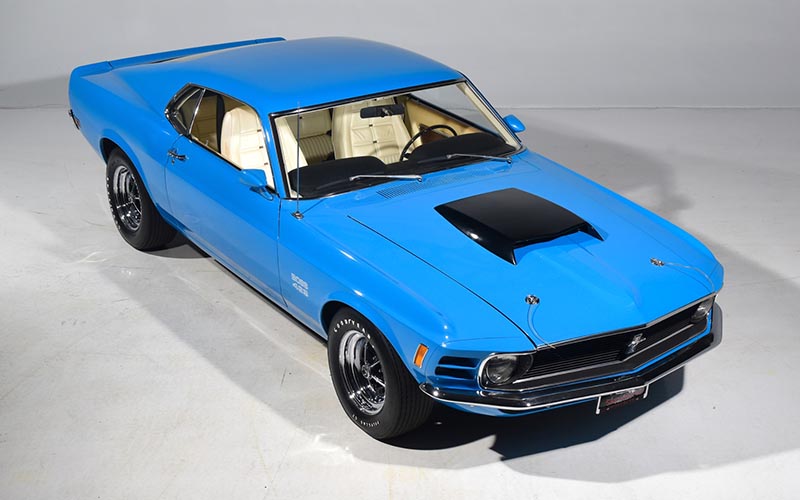 Boss 9 guru, Ed Meyer, was pretty impressed with the Grabber Blue 1970 Boss 429 Mustang when he inspected it. He said it is one of the Ten Best Boss 429’s he has inspected. He couldn’t got over how original this car was. That was in 2016. It is still stunning to behold.

The Grabber Blue 1970 Boss 429 Mustang is being offered for sale this week at Motorcar Classics in Farmingdale, New York. (Follow this link to review dozens of detailed photos.) They say KK 2073 is one of the early production cars in 1970. They believe it is the earliest one to be equiped with the Wheeling Pittsburgh California emissions fuel system. The vapor recovery canister and closed fuel system was located in the trunk along with the battery on the Boss 429 Mustangs.

There were only 857 Boss 429’s built in 1969. That was the first year of its homologation for NASCAR competition. NASCAR required that the engine be used in a factory production car in order for it to compete in NASCAR races. Ford decided that the big block Semi Hemi engine would sell better in the Mustang for street use, although they were campaigned in Ford Torinos in actual NASCAR competition. In 1970, there were only 500 built, just enough to homologate it to NASCAR that year. By 1970, the Z Code 429 engine came with a “harder” cam upping the horsepower and performance. The 1970’s will be the most valuable over time. They only produced the Boss 9 for two years.

With Parchment Deluxe Decor interior, and said to be numbers matching and original, this example has only 16,799 original miles. It has been owned by the same family for 41 years. Moreover, they say it was the 13th car built in 1970 at Kar Kraft, the Brighton, Michigan company Ford contracted with to handle the build. (They did not think it would be worth tooling up to make them at the Ford plant.) Shoe-horning the big Semi Hemi motor into the Mustang was a complicated process which meant moving the factory-front shock towers and lowering the front ride height.

The Grabber Blue 1970 Boss 429 Mustang is nicely documented, so you will get the owners manuals, original spare inflator, both a Deluxe and an Elite Marti Report (see it in the photos) and the original invoice.

Affectionately known as a Boss 9, this Semi Hemi big block Ford motor was perfect for stock car racing because it could achieve peak power at lower rpms. The racing 7.0-liter version had a forged steel crankshaft and steel connecting rods. In 1970, the Boss 9 got mechanical lifters (compared to the hydraulic lifters in ’69) along with a reworked exhaust sytem.

History of the Boss 429 Mustang

In order to get the Boss 429 motor certified for NASCAR competition Ford had to produce a street version of a car that used the Boss 429 big block Semi-Hemi engine. Although Ford raced this motor in the Torino Talladega in NASCAR, they believed they would sell more cars if they put the Boss 9 motor in their most popular seller, the Mustang Pony car, for homologation. NASCAR required that for any motor to be run in NASCAR competition the factory had to sell at least 500 cars with that motor in it for street use. And so the Boss 429 Mustangs were born. While Ford dominated NASCAR in 1969 with the Boss 9 motor, its greatest gift to the collector car market was the Mustang based Boss 429, which are now more valuable than a Hemi Cuda.

This elite group of cars were given a special NASCAR identification “KK” number when converted to Boss 9’s by Kar Kraft in Michigan. Kar Kraft had the job of modifying the body and suspension on the Mustangs to accomodate the huge Boss 9 engine.