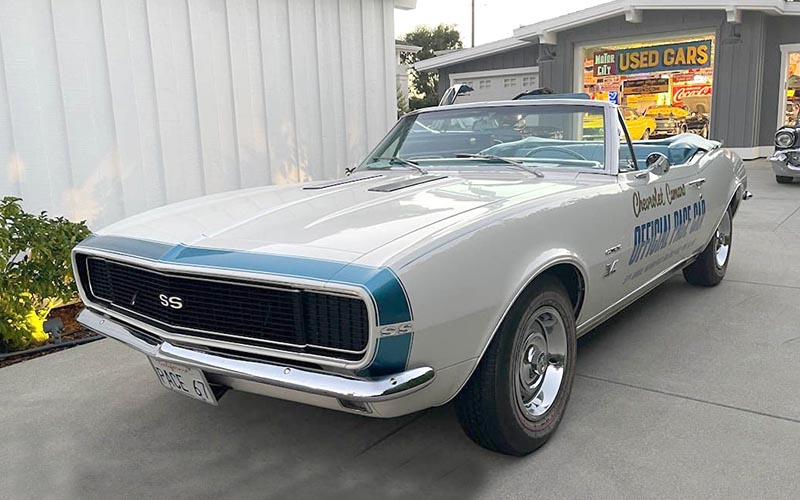 Although collectors will climb all over each other to get a chance to buy a 1969 Camaro Indy Pace Car, we think the rare 1967 Camaro Indy Pace Car Convertible will be more valuable one day. Now, we know this may cause some controversy among ’69 owners, but let’s look at the facts.

Because Chevrolet did not keep very good records on cars built in 1967 we don’t know exactly how many Pace Car editions were built. We know that 81 of the Pace Cars were present at the Indianapolis 500 Festival in the parade. Some experts have estimated that there were only between 103 and 193 ’67 Camaro Pace Cars produced. The ordering process for dealers from the factory was confusing, and dealers were only give two weeks to place their orders. By contrast, there were 3,675 of the 1969 Camaro Pace Cars built. That would indeed make the 1967’s more rare. In addition, the 1967 version has the distinction of being the first-year Camaro. That has broad importance to muscle car collectors. Over time, the rarity and provenance of the 1967’s should cause them to accelerate in value.

This week, REV Muscle Cars is selling a museum quality 1967 Camaro RS/SS Indy Pace Car Convertible for one of their clients in California. Not only is this a first-year edition Camaro, but it is a rare RS/SS Pace Car edition with a 396/325 hp engine and an M-21 4-speed transmission. When you look through the photos you will notice that it has been signed by A.J. Foyt, the Indy Car driver who won the Indianapolis 500 Championship race that year. This Pace Car has been restored to concours condition. (Look at the photos on the ad page.) The engine compartment and undercarriage are pristine. The ad copy indicates it also may have low miles.

REV Muscle Cars often represents high profile muscle cars for their clients. They have a grading system to evaluate the quality and condition class of each car. Their grade for this one is 92 to 96 percent of showroom new condition. They say it has a high degree of original factory fit and finish. This is a very high grade.

It is important to point out the correct decals on the doors, the proper Bumblebee stripe on the nose, the correct Ermine white tone paint, Rally Sport headlight doors, correct SS badging and non-functional hood vents. It even has the Firestone Wide Oval tires with Redline trim.

One Camaro forum noted that this is a C-1 car as noted on the cowl tag. It was one of the Pace Cars built to be sold through Chevrolet dealers around the country as a promotional replica. It was built in Los Angeles. The cowl tag decodes properly for a Pace Car.

Chevrolet sent many 1967 Camaro Indy Pace Car convertibles to the Indianapolis 500 in May of 1967. It was one of their big promotions for their fledgling first-year Camaro. They were provided by Chevrolet during Indy 500 week, and used by celebrities, track employees and GM VIP’s.  This is still a common practise today.

The rare 1967 Camaro Indy Pace Car shows in very nice condition. A car like this could appreciate in value. However, it would be important to have it inspected by a noted Camaro authority. REV Muscle Cars has documented in detail the important numbers on this car. You can refer to the ad photos for more information and to view all of the numbers on the car.