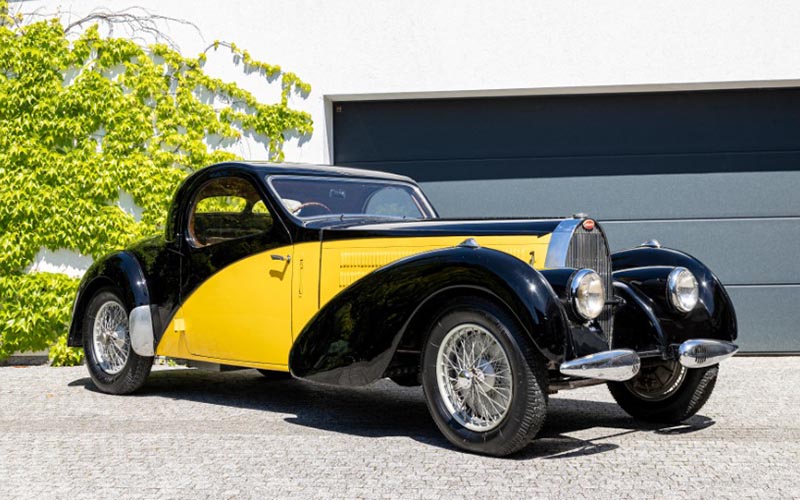 Through the ages there have been a few motorcars that have captured the imaginations of car afficionadoes the world over. One such car is the 1938 Bugatti Type 57C Atalante. It remains as one of the most significant cars in automotive history. For many of us it just gets better with age, to be appreciated much the same as a fine wine or piece of art work. It is a stunning original car with great pains taken to preserve its original character. Today only the wealthiest among us can afford such a car.

This supercharged version of the Atalante is being offered for sale this week at Gullwing Motor Cars in Astoria, New York. (Click here to find more photos and a complete history.) It is one of only three supercharged versions of the Atalante with the aluminum bodywork. They say it is numbers matching with a wonderful provenance. Much of its ownership history is known. “ … not many Bugatti road cars are quite as special as chassis 57767, as it is one of only three Atalantes that were built to its precise specification.”  From April 1935 to December 1938,  only 33 Type 57 chassis were fitted with the breathtaking Atalante coachwork, designed in-house at Bugatti by Joseph Walter under the close direction of Jean Bugatti. Chassis 57767 is the 31st of these rare chassis, and the number 31 is written on the inside of the hood, engraved on the woodwork on the trunk, and written in chalk on the back side of the dashboard woodwork. Out of the 33 cars built, only 16 came with the aluminum bodywork like this chassis 57767. And only five of the 33 were ever supercharged. This is one of only three to come with the aluminum bodywork and be supercharged by the factory. They were the lightest and fastest cars made at the time.

When this Bugatti was ordered new in 1938 by Mr Albert Cahen of Paris, it was later revealed that it was the last one to leave the factory, No. 31 of the series. (Two other Atalantes, No. 32 and No. 33 were pre-ordered and delivered. When it was delievered to Mr Cahen in Paris it was driven by M. Touissant, Ettore Bugatti’s private chauffeur. He did not get to enjoy the Bugatti for long, though, because Hitler invaded Poland in 1939. It is thought that the motorcar was packed away in storage for some time. The history of the car just after the war is cloudy because of poor record keeping. But from 1949 to the present much of the ownership history has been recorded. (Click here to read a detailed version of ownership on Gullwing Motor Cars ad page.) They believe it was shown twice at the Paris Salon exhibition and one owner had it in his collection for 60 years. It is fastidiously documented even to the extent of having factory letters from E. Bugatti and a report done by Pierre-Yves Laugier.

The black paint appears to be from the late forties. At some point, one of the owners had the sides of the car painted in yellow in the traditional Atalante style. The interior is original, including the dash and leather on the seats. Screen rubbers and wing seals are either original or were replaced in the late forties. One of the strong points of this car is in how original it remains. Not only was chassis 57767 built to the rarest of Atalante specifications, but no other Atalante can be found in authentic original condition to this degree.

Chassis 57767 has its 3,257 cc Dual Overhead Cam all-alloy 8 cylinder engine with a Stromberg Twin-choke carburetor. Withthe Roots-type supercharger they say it produces 160 horsepower at 5,500 rpms. The suspension has leaf springs at all four corners and uses 4-wheel hydraulic Lockheed drum brakes. The transmission is a 4-speed manual.

The 1938 Bugatti Type 57C Atalante will stand out in any collection and be welcome at any of the world’s foremost concours events.