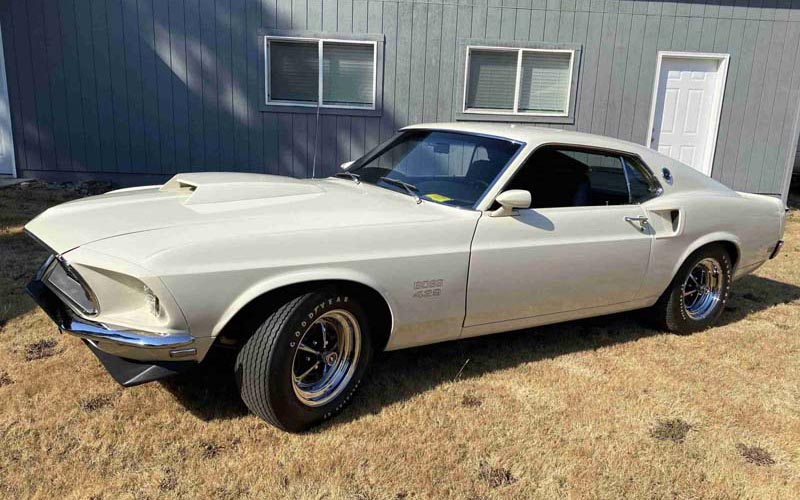 Boss 429 Mustangs have been selling for more than the vaunted Plymouth Hemi Cudas in the past few years. The monster Semi-Hemi Boss 9’s are just so rare. But this week a NASCAR KK 1969 Boss 429 Mustang was listed for sale at a big discount to the trailer queens that you see selling at big national auctions.

This 1969 Boss 429 Mustang is KK # 1401, referred to as a T-Code because it comes with the NASCAR Boss 9 motor. It is being offered for sale by its private owner in the state of Washington. (Click this link to review his ad description and photos.) He tells us it was extensively restored in 1995, and that the motor was refreshed in 2020 with 752 miles on the redo. The car itself is said to have just 33,543 original miles.

According to the ad description it is a 4-speed with 3.91 Traction-Lok rear differential and a competition suspension. The color is Wimbeldon White the way it came from the factory. It has a functional front spoiler, power steering and front disc brakes. It is shod with Goodyear F60x15 Polyglas tires on chrome Magnum 500 wheels.
BOSS 9 History

Defying convention, the NASCAR KK 1969 Boss 429 Mustang was one of the most successful homologation stories in NASCAR history, even though the revered Boss 9 Mustang never took the track in competition. In order to get the KK Boss 429 motor certified for NASCAR competition Ford had to produce a street version of a car that used the Boss 429 big block Semi-Hemi engine. Although Ford raced this motor in the Torino in NASCAR competition, they believed they would sell more cars if they put the Boss 9 motor in their most popular seller, the Mustang Pony car, for homologation. NASCAR required that for any motor to be run in NASCAR competition the factory had to sell at least 500 cars with that motor in it for street use. While Ford dominated NASCAR in 1969 with the Boss 9 motor, its greatest gift to the collector car market was its NASCAR KK 1969 Boss 429 Mustang muscle car.

Kar Kraft had the difficult job of fitting the massive 429 big block underneath the hood of a Mustang. The task involved having to widen the space between the shock towers and move the front suspension mounts in order to make room for the engine. Although Ford rated the Semi Hemi engine at 375 horsepower it was pretty much assured that it was really around 500 horsepower.

The Boss 9 is finished in Wimbledon white with black Clarion knit vinyl interior and Hi-Back bucket seats. It has the center console, a Philco AM radio and color keyed racing mirrors.